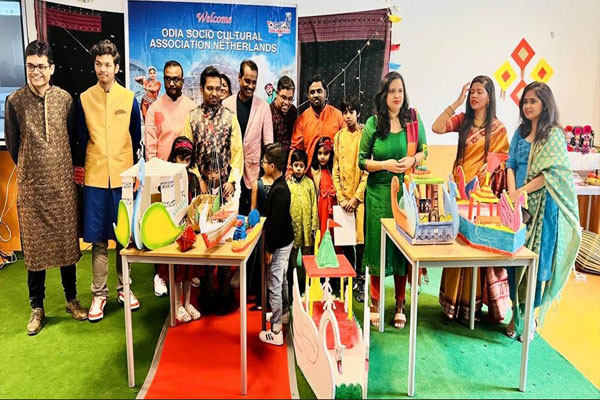 The celebration venue De Ruimte Auditorium in the city of Almere was elegantly and aesthetically decorated with colourful Sambalpuri Dupattas, Pipili Chandua lights and multiple collection of paper boats befitting to the occasion. The entire ambience was wearing the lavish look of a mini Odisha and was agog with astounding festive spirit. Since this year’s Kartik Purnima was being observed without Covid restrictions, unusual interest and unprecedented excitement were witnessed among the participants.

Started in 2017 with the humble attempt by a tiny group of 15 people, the festival has grown in multifold over the years and has attained the height of a mammoth Annual Fair in Europe.

The festival was inaugurated with the lighting of the ceremonial lamp by the chief guest, Founder of the Dutch organisation “Quality For Life (QFL)” Lelita Bindraban. QFL is presently engaged in implementing several social welfare projects in remote villages of Puri district in Odisha.

Addressing the gathering Bindraban showered profuse praises on team OSCAN for their sincere efforts to project, promote, propagate and popularise the rich art, vibrant culture, golden tradition and heroic heritage of Odisha in Netherlands. In his goodwill message the Chairman of World Odisha Society,  Kishore Dwibedi Complemented the noble initiatives of OSCAN for spreading the essence and fragrance of Brand Odisha in Europe.

The highlight of the Mega Event was the sailing of beautifully decked up boats in the canals of Netherland amidst the arati by ladies and chanting of “Aa, Kaa Maa Bai”. The atmosphere got reverberated with the sounds of Haribol, Huluhuli and blowing of conches by the attendees.

The special attraction of the mega event was the presentation of a spectacular cultural extravaganza by the members of OSCAN. The vivacious and varieties of entertainment items include recital of soul soothing Jagannath Bhajans, enactment of Bhagabat Tungi, Boat making competition among participants from various cities of Netherlands, painting competition among children on the theme of Kartika Purnima, Best Dress competition in the categories of female, male and children and display and distribution of delicious Odia delicacies like Aoo Chop, Jhalmudhi, Aloo Potala Rasa, Cheese Ball Curry and Suji Kakara Pitha.