Odisha: 1 dead, more than 25 others injured in stampede on T-Bridge connecting Singhanath temple

Cuttack: A woman was killed and more than 25 others sustained grievous injuries in an incident of stampede on Badamba-Gopinathpur T-Bridge connecting Singhanath temple during a huge congregation on the occasion of Makar Mela in Cuttack district, today. 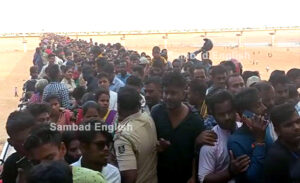 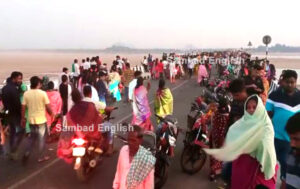 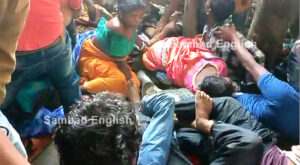 The deceased identified as 45-year-old Anjana Swain from Pathuripada of Banki died while undergoing treatment at the hospital. A minor child has sustained a fracture in his leg. “The fatal incident occurred due to a frenzied mob,” Badamba BJD MLA Debiprasad Mishra stated while briefing mediapersons.

Athagarh Sub-Collector Hemanta Kumar Swain said that around two lakh people including women and children had congregated in the afternoon to visit a funfair organised on Makar Sankranti Day as well as to pay their obeisance to the Lord Singhanath in the district.

There was a huge gathering as the Maker Mela was not being held for the last two years following Covid pandemic outbreak, Badamba block development officer expressed.

The injured were immediately admitted to the community health centre (CHC) in Badamba. Later, some of them were shifted to Cuttack SCB Medical College and Hospital (SCBMCH), a source added.

Three platoons of force have been deployed to control the law and order situation.

It is pertinent to mention, Makar Mela is organised every year on Mahanadi riverbed near the shrine. Hundreds of devotees coming from Cuttack, Khordha, Puri, Angul, Dhenkanal, Boudh and Nayagarh districts throng the shrine.

(Keep refreshing for updates as this is a developing story)