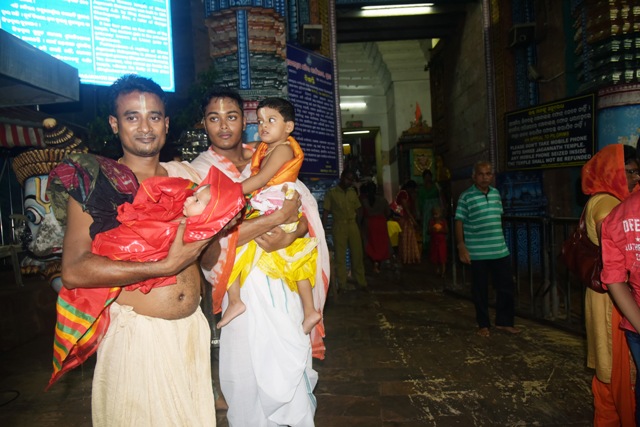 Puri: For the first time a 29-day-old baby was blessed to become the ‘youngest daitapati’ of Lord Jagannath during Anasara secret rituals at Sri Mandir here.

Daita servitor Sanjay Dasmohapatra, a resident of Dolamandap Sahi in Puri, offered his newborn baby Akshaya to Lord Jagannath as the baby daitapati in service of ailing lords during Anasara rituals as part of the age-old tradition continuing at the centuries old Jagannath temple in Puri.

As everyone in the daitapati family engages themselves in service of deities to conduct all the secret rituals of lords inside Anasara house from Snana Purnima till Niladri Bije, Akhshya became the youngest daitapati, who got opportunity to have darshan of ailing deities on Wednesday.

Sanjay took his son to the pedestal of Anasara house to offer him in the lords service and returned after 10 minutes.

He said that a servitor’s newborn boy can touch the deities after 21 days of birth. His son was blessed to have got this opportunity during Anasara period of the deities.