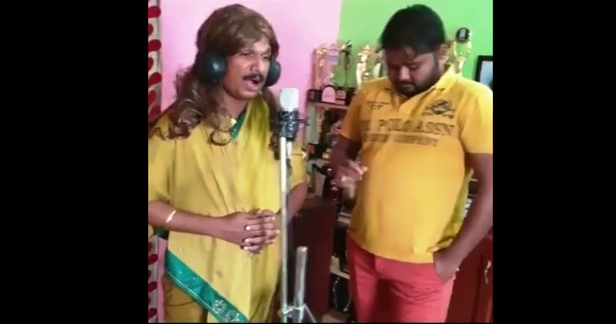 Bhubaneswar:  It seems like Ollywood actor Papu Pom Pom enjoys to remain in news through controversies.

After getting slammed by people from several  quarters over poster of his upcoming movie ‘Mr Kanhaiya’ followed by his derogatory remark on sprinter Dutee Chand, the comedian has again drawn flak for his mimicry on recent internet sensation Ranu Mondal.

Netizens have started bashing the Ollywood actor after a video showing him doing mimicry of Ranu Modal went viral on social media last night. In the video, Papu is seen draped in a Saree wearing a wig and lip-syncing a track originally sung by Ranu Mondal.

Standing before a mic, Papu can be seen posing like Mondal and lip-syncing the song ‘Teri Meri Kahani’ of Himesh Reshammiya’s project ‘Happy Hardy and Heer’.

However, the actor could not be contacted to comment on the matter.

Worth mentioning, Ranu Mondal, a resident of West Bengal, shot to fame after a video showing her singing a track of legendary singer Lata Mangeshkar at a railway station went viral on social media. Seeing the video, Bollywood singer and music composer Himesh Reshammiya offered the 59-year-old woman to sing for his upcoming film.