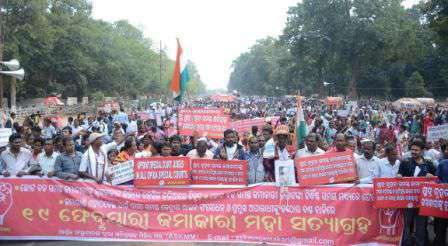 Bhubaneswar: Agitating duped chit fund investors, who were on an indefinite sit-in dharna in Odisha capital demanding refund of money, postponed their strike till February 22 after the State government today assured to fulfill their demands and to bring out a White Paper on the chit fund scam.

The decision was taken after a discussion was held here this afternoon between government officials and representatives of the protesting investors. Thousands protesters under the banner of the Chit Fund Khyatigrasta Milita Manch staged a huge rally at Lower PMG Square here today.

“The State government is aware about the demands (of the the duped investors) and supported it. The government will soon release a White Paper mentioning the steps being taken in this regard so far,” senior BJD leader and Rajya Sabha, MP Soumya Ranjan Patnaik, told reporters here soon after the meeting.

He further said that the Finance Minister met a representative team of the Chit Fund Khyatigrasta Milita Manch and discussed ways how to resolve the issue.

The State government has also decided to speed up the identification process for the benefit of small investors. “A meeting will be held with district collectors on February 22 to decide the final action plan on how to intensify the entire process,” Patnaik added.

The commission had submitted its first interim report in May 2016.

Submitting its sixth interim report earlier in the month, Das had told that 3.61 lakh small investors, around 50 per cent of the total, have been identified so far and it may take 2-3 more years to identify the other victims.

The commission identified small investors, with below Rs 10,000 deposits, to return their money on a priority basis.

Call off strike or face action: Odisha govt to NNKS