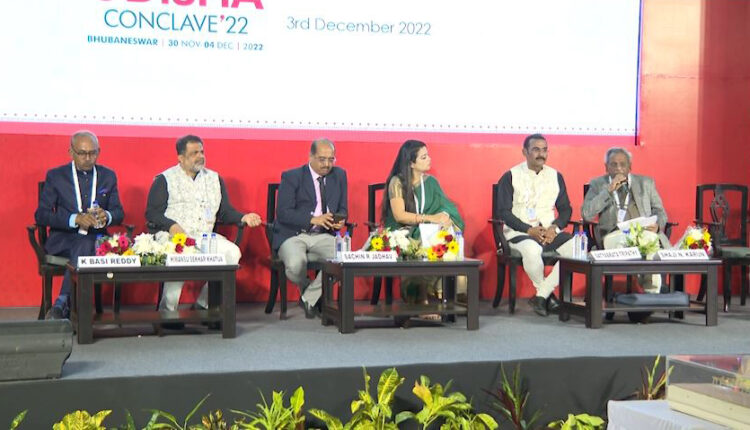 Bhubaneswar: Day-3 of ‘Make in Odisha Conclave 2022’, one of the largest flagship investors’ summit in the country organised by the Government of Odisha in association with FICCI, witnessed an interesting panel discussion during the sectoral session on Growth of Odia Film Industry.

Director-cum-Additional Secretary Jadhav said, “Film is a supreme craft of story-telling. If you search for 10 stories in Odisha it will give you 10 million stories.” Jadhav also highlighted how tourism and film locations were the character of films.

These days, Tourism sector is focusing on attracting the national as well as prominent film makers to Odisha. Jadhav stated that currently the State government is more focused on infra development of the Odia film industry.

“Odisha is a land full of ancient temples, national parks as well as reservoirs. The government is determined to give logistics support like accommodation, transportation and provide elite facilities. The government previously invested 3,000 crore in the sector to enhance inflow of film makers to Odisha. The State stepped into another terrain that the country never witnessed before,” Jadhav added.

Indian film director and cinematographer Karun said, “Odisha has a very bright future for creative art because of the support of the State government, as well as supportive bureaucrats.  Cinema by itself is a discovery of science. Cinema belongs to everybody.”

Karun also shed light on the internet revolution and how it directly impacts the film makers. The cinematographer highlighted the fact that as a film director it was their responsibility to create the right creative content so that it would be accepted by all. “We should be more focused on script writing. The basic ingredient of a good movie is human emotion,” he added.

It is pertinent to mention, the inaugural edition of the Make in Odisha Conclave was organized in 2016 to showcase the manufacturing prowess of the State and the investment potential in diverse sectors.

It was an overwhelming success, with the announcement of investment intent to the tune of INR 2.03 lakh crore. This year the Conclave will be a celebration of five days, presenting Odisha, its potential and achievements, to the world with Japan, Germany and Norway as partner countries.

It will also be a platform to exchange ideas and share knowledge. The Conclave will have sector specific seminars across food processing, agro-business and agro-marketing, chemicals petrochemicals and plastics, metal downstream and ancillaries, IT/ITeS, textiles and apparels, renewable energy and equipment, real estate & social infrastructure, healthcare and pharma, film and entertainment, tourism, biotechnology, logistics and warehousing, aerospace & defence apart from other engaging events.