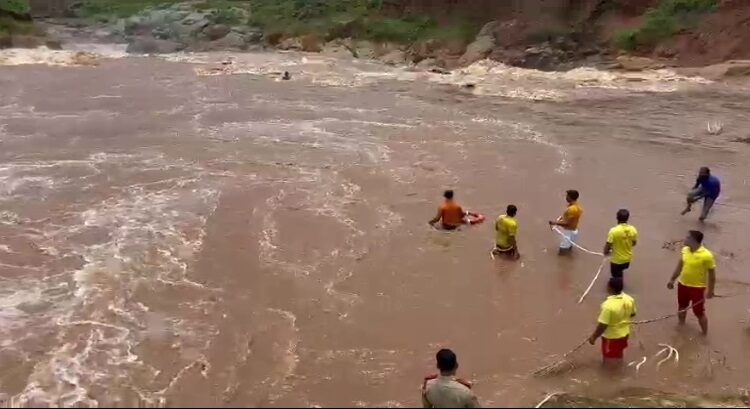 Rayagada: A tourist from neighbouring Andhra Pradesh reportedly jumped into the Nagavali River in Rayagada district to save his three children after they were swept away by strong currents of water in front of him.

The person was identified as C Gopalkrishna from Eluru district of Andhra Pradesh. While he managed to rescue his two sons, his another child went missing in the river.

However, the firefighters managed to rescue the tourist from the river.

According to reports, six members of a family from Andhra Pradesh’s Eluru district had visited the famous Maa Majhighariani Temple in Rayagada district today. After having darshan of deity, Gopalkrishna along with his three children went to the Nagavali River to take bath.

The three minor children were swept away by strong water currents after they entered into the river. After seeing his children drowning in water in front of him, Gopalkrishna without any second thought jumped into the river to save them. He successfully fished out two of his children from the water, however, failed to rescue his 6-year-old son.

“Total six members of a family had visited the Majhighariani Temple and four of them including three children had been to the river. They all got stuck in the river. While the man, who was rescued, managed to save his two sons, he along with his another son was swept away by strong water currents of the river. During the period, his child was slipped out of his hands and went missing. He managed to stand firm by holding a rock in the river. We managed to rescue the man,” said Sukant Kumar Mohanty, a Fire Services staff engaged in the rescue operation.

Till the last report came in, the search was underway to rescue the missing child.

India hiring not impacted by high global inflation, new jobs up by 29%