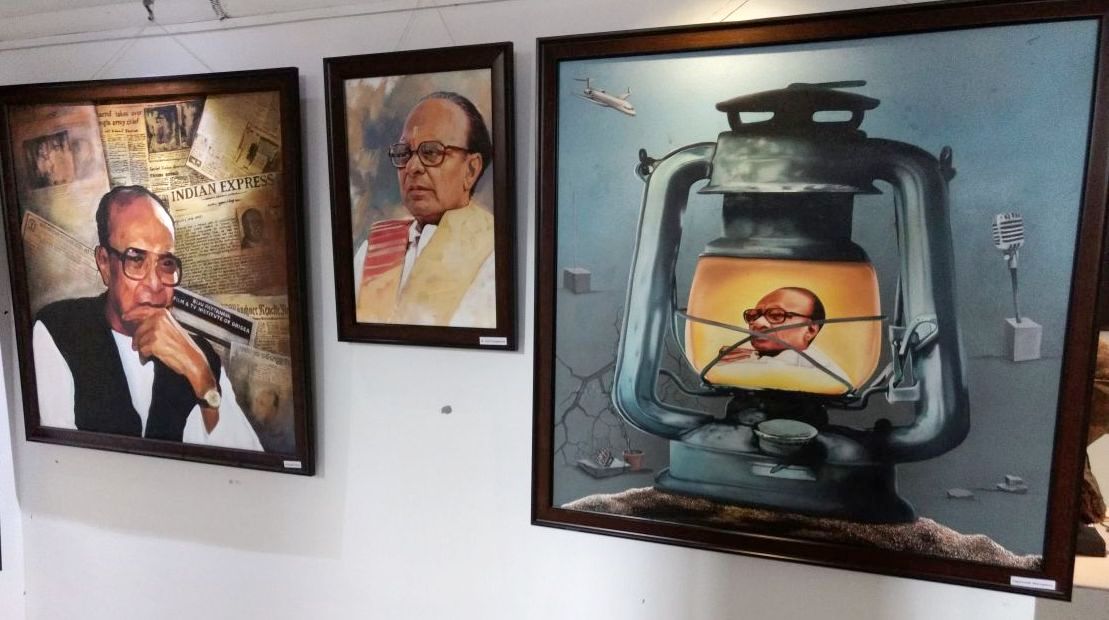 Bhubaneswar: This is a second attempt at theme-based art exhibition. After Mahatma Gandhi, ‘Tall Man’ Biju Patnaik has taken centre stage with artists from the state and other parts of India putting their thoughts down on canvas, giving shape and adding colours bringing out his contribution in laying the foundation of modern Odisha.

The installation are not less effective in putting across the message and his relevance in the present world.

The ‘Biju Corner’ immediately draws attention. It has 12 art works, along with two sculptures, by the founder of Suvadra Art Gallery, Rabi Narayan Rath. “These will later be preserved at the Biju Patnaik Memorial Museum in Cuttack, the rest paintings on display are for sale,” said Director of the gallery Ashok Nayak.

The installation by Amiya Das is another attraction, which charts the legendary leader’s political journey and that of his ideology from ‘Chakra’ (wheel) denoting Janata Dal to ‘Sankha’ Biju Janata Dal, carving out the modern Odisha.

Another installation using tin plates, titled ‘Kalinga Sandha’ by Md Anwar stands testimony to power he wielded as a leader. Also on display a fibre sculpture of the statesman.

The ‘Bhoomi Putra’ concept along with his achievements, and the demand for Bharat Ratna also found place on the canvas of different artists.

The lively portraits, one among them drawn on a newspaper, bring out the different facets of his personality. The artists have also drawn the postage stamp on Biju Patnaik and a postcard with him on it, while a sketch speaks about the momentum of growth, which Odisha Chief Minister Naveen Patnaik has managed to maintain, and the transition of power.

While we rejoice Bhubaneswar’s new status as the ‘Sports Capital’ of India, its foundation was laid by the Biju Babu, who instituted the Kalinga Cup. These different aspects of his personality has made it to the canvas on display at the gallery.

Altogether, there are 62 art works by 53 artists. “The expo was conceptualised by our chairman Surya Rath following the success of ‘The Gandhi’. The greatness of Biju Patnaik is confined to Odisha, though his influence was global. Therefore, we roped in artists from all over India, for the exhibition,” added Nayak.

The exhibition was inaugurated on April 1 and will draw to a close on April 17, coinciding with the death anniversary of the visionary leader.

26 schoolkids among 29 killed in Himachal accident