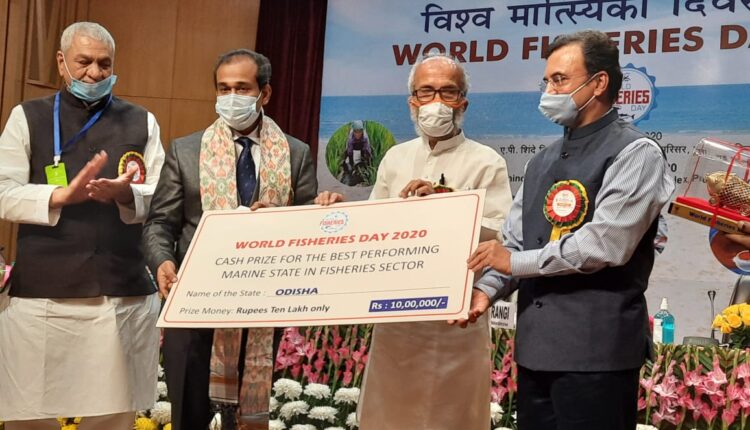 Bhubaneswar: Odisha achieved another milestone in field of fisheries and aquaculture as the State received two prestigious national level fisheries awards on the occasion of ‘World Fisheries Day’ during an event organised today in New Delhi.

The awards were presented by Union Minister for Fisheries, Animal Husbandry and Dairying Giriraj Singh in presence of Minister of State Pratap Chandra Sarangi and Sanjeev Kumar Balyan along with dignitaries from Government of India.

Expressing pleasure over the achievements, Chief Minister Naveen Patnaik in his message stated that Odisha is committed to be a pioneer State in fish production to ensure food security and boost livelihood. He congratulated the Fisheries & Animal Resources Development Department and Kalahandi District Administration for receiving the awards.

The Fisheries & Aquaculture sector in Odisha grew at an impressive rate of 18.98 % and produced around 8.16 lakh Metric Tons of fish during 2019-20. The Average Annual Growth Rate of the fish production in the State over last 5 years is over 14%, which is one of the best in the food and agriculture sector. As per the NSSO reports, the share of farmer’s income in Odisha from allied sector activities including livestock and fisheries has significantly increased over last 2 decades from than 1.5 % to 26%. The seafood exports from the State has increased by 78% in last 5 years from Rs 1817 Crore during 2014-15 to Rs 3243 Cr during 2019-20. Currently the State exports over 66,000 tons of sea food, majority of which is frozen shrimp.

The State Government has taken up massive programs to boost the fish fingerling production in the State. Four Mega Fish Spawning centers are being set up in the State at Kausalyaganga, Saramanga, Chiplima and Bhanjanagar which will produce continuous and year round fish spawn. Private fish seed growers and hatchery operators will be supported for quality fish seed production through fish hatchery accreditation and seed certification, stated the State Fisheries and Animal Resources Development department in a release today.

The policy for undertaking Cage Culture in reservoirs by individuals and entrepreneurs was launched by State Government during March 2020. Cage Culture fishery is an emerging technology for intensive production of fish and has huge potential for increasing the fish production. It is often considered as the future of reservoir fisheries which can lead to achieving self-sufficiency in the fish demand of the state and also promote entrepreneurship and create jobs. Accordingly, State Government has allowed 1% water area in eight large and medium reservoirs for taking up commercial cage culture which can quickly increase the fish production by at least 1.25 lakh MT per annum.

State Government has introduced schemes for promotion of Bio-floc based farming system for intensive shrimp and fish farming using limited area, water use and feed. Further, Deep sea fishing vessels are being introduced for the first time in the State for harnessing the marine fishery resources in the Exclusive Economic Zone.

Chhattisgarh man crushed to death under train wheels in Odisha