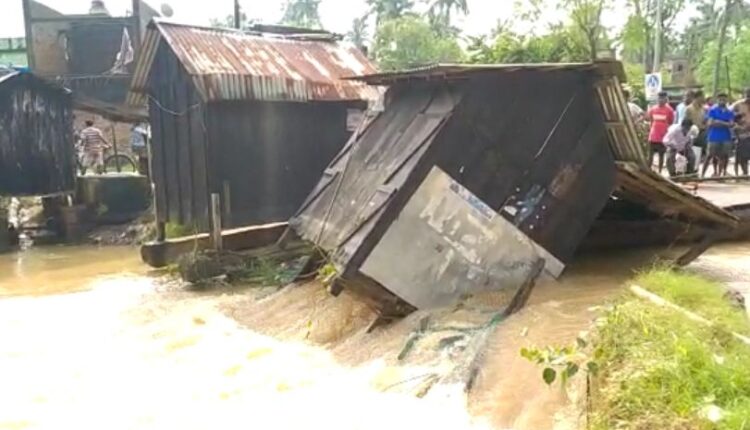 Bhubaneswar: Baitarani and Jalaka rivers in Odisha continue to swell after incessant rainfall in the state while several areas of Jajpur and Mayurbhanj district witnessed flood-like situation.

As per latest information, Baitarani and Jalaka were flowing at 18.32 and 6.62 marks with rising trend at Akhuapada and Mathani at 9 AM against danger level of 17.83 and 5.50, respectively.

In Jajpur district, 3 embankments of Brahmani river breached yesterday, for which people in 67 villages under Bari and Rasulpur blocks were marooned. Besides, paddy crops and roads were damaged in the areas.

Flood-like situation in Madhuban area of Baripada town was witnessed that affected around 200 families.

On the other hand, excess water was being released from Hirakud dam through 28 sluice gates as four more gates were opened today. The reservoir level stood at 628.50 against full reservoir level of 630 at 9 AM.

With the opening of more gates of Hirakud dam to release excess water, Mahanadi river is likely to swell while a low to medium flood is expected, said Odisha Special Relief Commissioner Pradeep Kumar Jena yesterday.

The SRC said around 7 lakh cusec water is likely to pass at Mundali barrage. However, the situation won’t be critical in low-lying areas, he said.