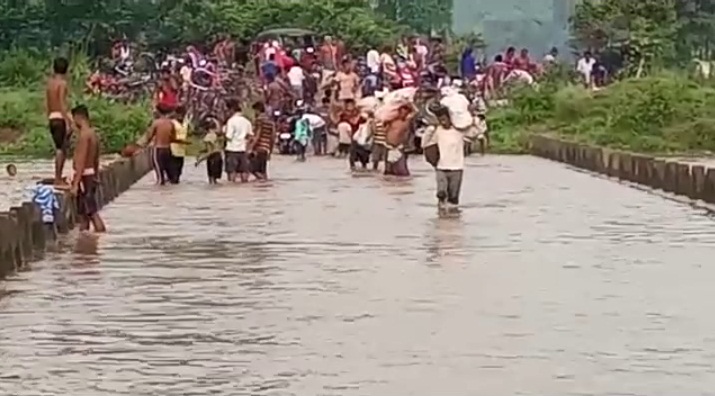 Bhubaneswar: With the incessant rain triggered flood fury across Odisha, Balangir district registered a record rainfall of 145.1 mm in past 24 hours.

However, the maximum rainfall occurred in Balangir block in a day.

Balangir block has recorded rainfall of 555 mm followed by Puintala 333 mm and Deogaon 238 mm all in the district of Balangir, Sethi said.

A total of 134 villages and 19 blocks in seven districts — Balangir, Boudh, Kalahandi, Nuapada, Sonepur, Bargarh and Kandhamal — have been affected in the heavy rainfall in past 24 hours.

Heavy rain to lash 10 Odisha districts in next 24 hours

Over 20 lakh population was affected in the continuous rain and 44,471 persons were evacuated from their houses for safety measures. The victims were sheltered in 124 free kitchens and relief camps.

However, no casualty due to the heavy rains was reported so far.

The situations of rain-hit districts are improving from today.

“There were severe waterlogging situation in Tarva of Sonepur district. But, water has receded from submerged areas mostly. As Balangir district recorded no rain since last night, the water lever has receded. About 18,000 people have been evacuated and sheltered at about 60 relief camps in five affected blocks and two ULBs,” the SRC said.

In Kandhamal and Kalahandi, the situation was found to be normal.

“The rainfall has stopped since yesterday afternoon in Kandhamal district except drizzling at a few places. The restoration work is in progress on NH 59 near Baliguda and Tumudibandh. In Kalahandi, intermittent rains in M Rampur were observed. However, rain has stopped in other blocks,” Sethi said.