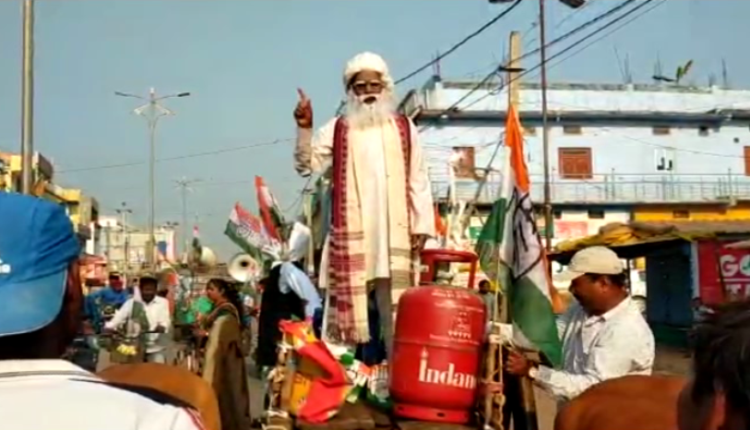 Umerkote: In a unique way to observe Odisha Bandh, a Congress worker dressed up as the Prime Minister Narendra Modi protested the steep hike in fuel and cooking gas prices in Nabarangpur district.

In Modi’s attire and style, the protestor on a bullock cart satirised the rising petrol and diesel prices.

“Mujhe Bataiye Petrol ke daam kam huye ki nehin huye (Tell me whether the prices of petrol fell down or not)? Aise nehin, pure taakat se boliye (Not like this, answer it with full force),” he asked the public in Umerkote.

He repeated his questions the way the PM is seen addressing the gathering in all the public meetings and election rallies.

All the shops, schools and colleges were shut and vehicles were off the road in Nabarangpur district after the State unit of Congress party called for 6-hour bandh across Odisha against fuel price hike.

“As per decision of Odisha Pradesh Congress Committee (OPCC), the party workers shut all the commercial establishments and transport services in Nabarangpur district in protest against Centre and State Governments for rising prices in petrol, diesel and LPG gas cylinders. The Congress will protest it time and again till the governments reduce the prices,” a Congress protestor said.

New FASTag rule: All you need to know

Odisha Congress hits streets over fuel price hike ahead of…