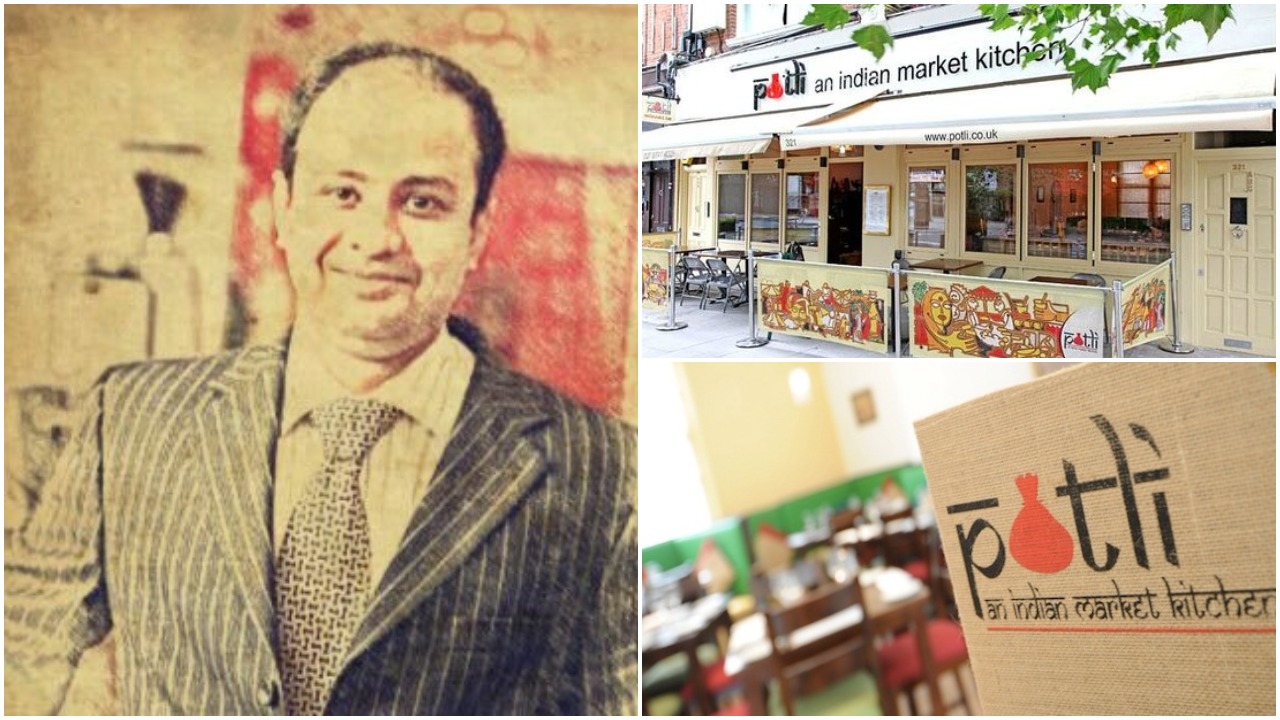 Bhubaneswar: Potli, an Indian market kitchen, run by an Odia in London has been tickling the taste buds of the Britons and countrymen alike since 2011, the year when it also played host to Odisha Chief Minister Naveen Patnaik.

The restaurant was launched with a completely new concept, celebrating the Indian marketplace cuisine.

Odisha Sun Times caught up with restaurateur Uttam Tripathy, tracing his journey from Sambalpur to London.

Q. Tell us about your journey from Odisha to London?

It started in 1995 when I completed my schooling from KV Sambalpur. Coming from an academic family background, I thought I had only a few career choices. My father shared my opinion – that I was not made for a conventional career and spoke to me about alternatives including hotel management. The same year I got into the prestigious Institute of Hotel Management & Catering Technology, Chennai (then Madras). I completed the course in 1998 and was offered a job at the newly-opened Radisson Hotel in New Delhi. It was an important 4.5 years for me as that was when I learnt the basics of the trade. I was involved in the opening of the first, now iconic, The Great Kebab Factory and later an American restaurant chain, Italianni’s. While still working there, I was offered an opportunity to manage a restaurant in London which I first decided against, but later thought it will be a good couple of years of exposure for my nascent career. I moved to London in 2002.

Q. What laid the foundation of Potli?

While working for others, I was involved in the opening a few big restaurants in London and although I was offered stakes in those businesses, I decided to pursue my own dream of launching a quality Indian restaurant which will celebrate the various marketplaces of India. Marketplaces in India are where the modern Indian commercial cuisine evolved. Until recently, India didn’t have a great restaurant culture (barring big cities) but what it had was small makeshift (or otherwise) restaurants serving a dish which they were famous for. The Paradise of Secunderabad was where the Hyderabadi Biryani became both commercial and successful. One can say that the concept of Kebabs was made popular by Tunde Kababi of Aminabad Market in Lucknow. These are just a few examples but every town or city in India has a market which is famous for something. The dhabas across India are also a big contributor towards commercialising Indian cuisine. I remember during my childhood, an occasional (rare though) food (particularly their chana masala and tandoori roti) from the famous Beri Dhaba in Remed, Sambalpur, was both exquisite and delicious.

So, we decided to launch a restaurant that will celebrate the marketplaces across India and bring their best dishes under one roof in London.

Though the UK has over 10 thousand Indian restaurants but only a few of them serve authentic food. I was disappointed to see the misrepresentation of Indian food here, and so we decided to launch Potli in 2011.

Q. Tell us a little more about the Indian market bazaar concept.

As mentioned earlier, the kaleidoscopic bazaars in India was where the commercial food got prominence. The kind of food we see on menus today -.India, until recently, hadn’t had great restaurant cultures. I can count how many times I have eaten out in restaurants when we were children. But we all can associate ourselves with the food we used to eat at local marketplaces. The scrumptious Vegetable Chops in Cuttack to the mouth-watering Pani Puris of Chowpathy, Mumbai; every town or city has a marketplace famous for something. At Potli, we celebrate these amazing delicacies which are individually cooked with freshly ground spices, and strive to bring that magical mix of flavour and aroma to the people of London.

Q. What does the name signify?

Potli in general means a pouch but in culinary terms, it means a bag/pouch of spices. While working with Khandani Lucknowi chefs in India, we got to know the use of Potli in Indian cooking. They use Potli for two reasons: One to ensure only the flavours get into the dish and not the spices and secondly, they are well hidden to maintain the secrecy of a traditional recipe from others. Potli is a bag of spice similar to ‘Bouquet Garni’ used in French cooking.

Q. Any Odia dish on the menu?

Of course, my favorite is vegetable chops (beetroot, peanut and potato croquettes). I use my mother’s recipe to make a simple Odia prawn curry. Again, borrowed my mother’s recipe is the Sambalpuri Janhi Chattu (ridge gourd and mushroom). And, one of our Sunday Odia staple is the Railway mutton curry (mutton on the bone with potatoes).

Q. How do the English perceive our food?

The Britons love Indian cuisine. They say that ‘Chicken Tikka Masala’ is the British national dish. The good thing is that with time and knowledge, their palate is changing. They are moving towards authentic Indian food from traditional British curry houses.

It’s a beginning- still, but qualified Indian chefs and restaurateurs are changing their perception. Both Indian cuisines in general and Indian restaurant in particular are hugely popular in the UK. People from across the globe acknowledge London (and the UK) as the Indian cuisine destination.

Q. How difficult was it to stay afloat in the restaurant business in a foreign country?

Huge, can’t describe what all I went through when we opened Potli. I remember that for a long time I hardly had enough monies to keep up with my daily expenses. The first 3-4 years were tough, and more so because we are the first-generation migrants and don’t belong to a business family. I came to the UK with only £70 in my pocket. Whatever I earned, I invested in the business. I always say that if doing business would have been easy then we would have seen a lot of them. Another thing is that doing business the right way is even tougher. But as they say if your intentions are clear, then with a passion and conviction, the hurdles slowly disappear. Potli started getting recognition as one of the best Indian restaurants in London. It is just the beginning and we have a long way to go.

Q. You have opened a second outlet. Tell us more about it.

I started ‘Bistro Vadouvan’ along with my old hotel management friend, Durga Misra, who happens to be an Odia too. He is a brilliant, creative and talented chef, and has been specialising in French cuisine in London for over 15 years now, and working with some of the best-known French chefs.

Bistro Vadouvan is also a first-of-its-kind where we offer traditional food of South of France, with influences of spices from North Africa, Middle East, Asia and the Orient. We launched it in July 2017 and it has been attracting a lot of positive reviews.

Q. How has been your experience of bringing Indian food bazaar to London?

It has been a dream journey so far. At first, people couldn’t understand the concept but slowly we have been able to educate people about the importance of Indian marketplaces to shape the modern Indian cuisine though the extraordinary culinary experience Potli offers. Customers and critics have enjoyed the experience alike. We can boast that around 75% to 80% of our clients are regulars.

Q. What are your favourite Odia dishes?

I love everything that is Odia. My personal favourites are vegetable chops, Odia mutton and prawn curries. The Odia dishes are very popular at Potli.

Q. Any plan to introduce the Odia spread in London?

We are doing it here and will continue to do it in future too. Nowadays, there are many Odias in the UK and when we meet up to celebrate occasions like Nua Khai, Potli prepares delicious Odia food. This year for the annual Odia get-together in Manchester, Potli will be preparing food for over 300-400 Odias, who will be attending it.

Q. What do you miss the most about Odisha?

I miss everything about Odisha. My family, my relatives, my friends and Sambalpur in particular, where I grew up. Also, the delicious food across Odisha. I can’t forget – the Poda Mansa and roasted mutton stuffed in bamboos near a dhaba in Angul.

Uttam signed off by saying that he owes his success to talented chefs, excellent managers and team members, who are the true torch bearer of authentic Indian cuisine in the UK.

Odisha youth get innovative with birthday gifts. Here’s how