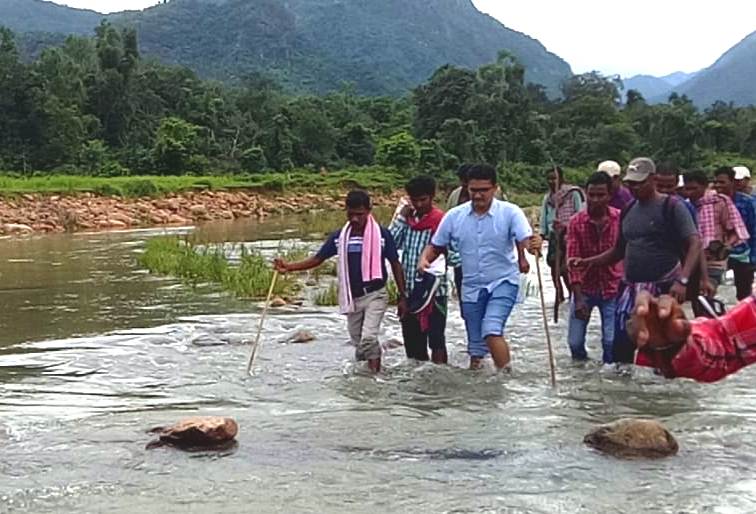 Berhampur: Moved by reports of flash flood in Elagol village of Ganjam district, Berhampur Sub-Collector Sindhe Datatreya Bhaosaheb rolled up his sleeves and headed towards the far-flung areas crossing river and wading through knee-deep water.

Worth mentioning, tribal people in the region have been facing several difficulties due to lack of road communication following commencement of a medium irrigation project at Baghalati under Patrapur Tehsil. Cyclone Titli had further worsened their situation. Adding to their woos, incessant rain on August 31 triggered flash flood in Elagol village.

Soon after the news surfaced, the IAS officer accompanied by Patrapur Tehsildar reached Beheraput village by crossing Baghalati reservoir through a powerboat. After discussing with the locals about their problems, the bureaucrat again left for Shrigonda village to take stock by crossing Bahuda river.

Thereafter, he headed to Elagol village crossing a nullah and later wading through knee-deep water and held a meeting with the villagers to discuss their problems. The Sub-collector also identified a land near Jhagadapalli for rehabilitation of affected villagers of Elagol. He also assured people of three other affected villages of rehabilitation. Besides, he promised that steps will be taken to ensure all Governments schemes benefits reach out to women and for inclusive development of the villages.