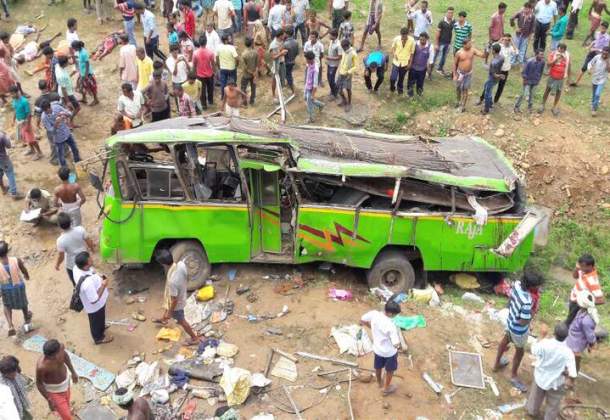 Overloading and reckless driving led to the tragic bus accident at Athmallik in Odisha’s Angul, said a report submitted by a 4-member team to the district Collector.

The team, led by Athmallik sub-collector and comprising of SDPO, SDMO and Angul RTO, submitted the report to district Collector Anil Samal yesterday after preliminary investigation. Samal had formed the team after the accident yesterday to probe into the incident.

“Both the bus owner and the driver are absconding. We can get the exact reason of the accident after the driver is nabbed,” said Samal.

“The RTO has submitted a report over the accident. It has been mentioned in the report that the bus driver was talking over mobile phone when the accident took place. However, the vehicle had fitness certificate and license,” said Transport Department Commissioner Chandrasekhar Kumar.

“A meeting of bus and truck owners is scheduled for Monday in which overloading and over-speeding would be discussed. Besides, a decision would be taken to ban drunk driving and talking on mobile phones while driving,” Kumar said.

On the other hand, the bus driver who fled the spot and went absconding after the mishap is still at large. Police have launched a manhunt to nab him, sources said.

In a related development, out of 22 critically injured undergoing treatment at SCB Medical College and Hospital in Cuttack, five have been shifted to the ICU. The condition of one of them is stated to be critical, sources added.

Notably, at least 19 persons were killed and around 48 injured when a bus in which they were travelling fell off a bridge near Puruna Manitri at Athmallik in Angul district yesterday.

Min seeks report on mysterious killing of sheep in Odisha’s…