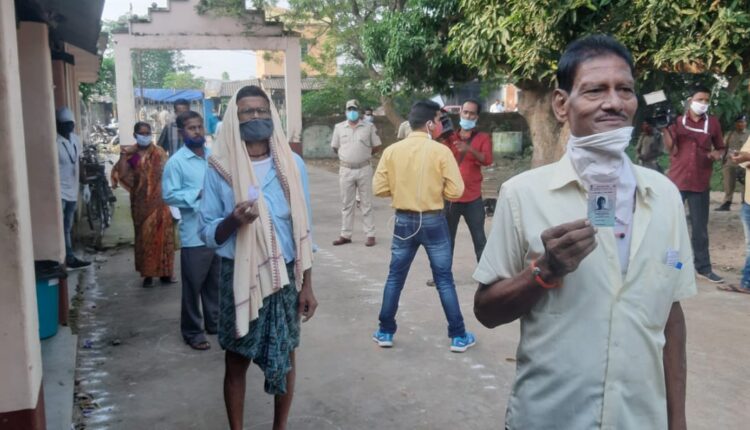 Balasore/Tirtol: Voting for bypolls to Balasore Sadar and Tirtol assembly constituencies commenced at 7 AM today amid adherence to COVID-19 guidelines. This is the first election in the state after the pandemic.

Around 3500 polling personnel, 800 ASHA workers and equal number of volunteers have been engaged for poll duty.

All booths are being sanitised frequently while polling staffers have been screened and only healthy personnel were roped in for election duty. They have been provided with COVID kit comprising mask, face shield, sanitiser, glove, and PPE.

Two additional manpower including one ASHA worker have been engaged who will be stationed outside each polling station to ensure social distancing and thermal screening of voters.

Any voter having higher temperature or any symptom will be segregated and given a waiting token. They will be allowed to vote in the last hour.

Provisions for soap, water and sanitiser to clean and sanitize the hand of the voters have been made. Each voter will be given one glove which he/she will put on his/her right hand before casting vote. They will perform all polling-related works like signing on the form and pressing the EVM button using the same hand.

As many as 86 booths in Balasore Sadar and 155 booths in Tirtol have been identified as critical polling stations. CAPF deployment and provision of webcasting have been made at such booths.

A total of 90 platoons of police force, 250 officers and 6 companies of CAPF have been deployed for smooth conduct of the bypolls.