BIG STORYFEATUREDODISHA LATEST
By Biswajeet On May 4, 2017 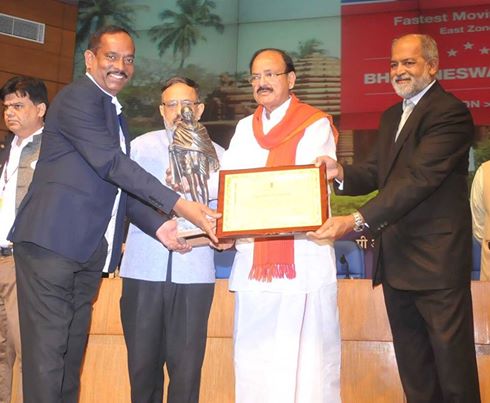 Country’s no 1 smart city Bhubaneswar has emerged as the fastest moving city in the east zone with a population of over 10 lakh in the Swachh Survekshan-2017– sanitation rankings of cities/towns of India– commissioned by the Ministry of Urban Development.

Bhubaneswar Mayor Ananta Narayan Jena received a memento and a citation in this regard from Minister of Urban Development, M. Venkaiah Naidu at a function in New Delhi where the latter announced the results of the survey.

Similarly, Rourkela was adjudged as the fastest moving city in the east zone with a population of 2-10 lakh.

While Bhubaneswar has been placed at the 94th spot in the survey, Rourkela has grabbed the 168th place.

While Indore topped the list as the cleanest city of India, the second spot was occupied by Bhopal and Visakhapatnam was placed at 3rd position.

Quality Council of India, which conducted the survey during January-February this year, deployed 421 assessors for on the site inspection of cleanliness in 434 cities and towns and another 55 for real time monitoring of progress of survey and field inspections. Field inspectors used geo-tagged devices for collecting evidence in real time of their inspection at 17,500 locations.

Swachh Survekshan-2017 aimed at capturing the outcomes on ground of the ongoing efforts to make urban areas Open Defecation Free and to improve door-to-door collection, processing and disposal of Municipal Solid Waste.

Of the total score of 2,000, 900 marks were assigned for performance in respect of ODF and solid waste management, 600 marks for Citizen Feedback and 500 marks for Independent Observation.