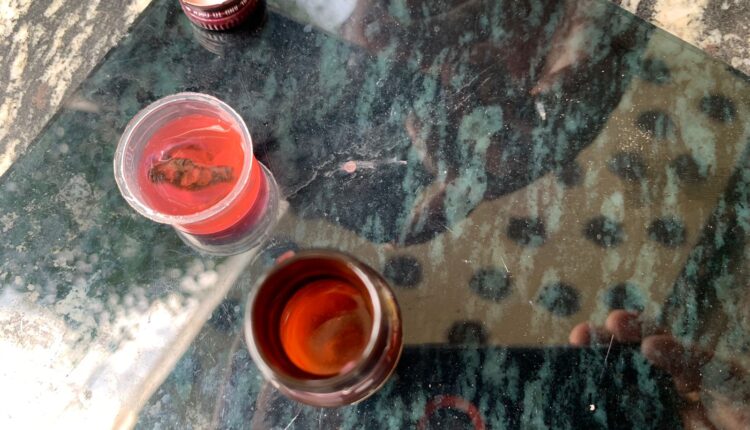 Baripada: It seems the Odisha government’s flagship programme ‘Niramaya’ is a dud. Instead of serving the purpose curing patients with the medicines distributed for free of cost, the scheme has become life-threatening for them.

At Pandit Raghunath Murmu Medical College and Hospital, Baripada, a three-year-old patient was provided with medicine under the ‘Niramaya’ scheme. When Sk. Serajul, father of the child was giving the medicine, he found a centipede or snake like object in the bottle.

As per Serajul, a resident of Sunagadia under Baripada police limits, he brought his three-year-old son, who was unwell, to a Doctor at the PRM Hospital.

The Doctor prescribed a medicine after checking the condition of Serajul’s son. Following this, Serajul went to the Niramaya counter on the premises of the PRM hospital to get the medicine.

Serajul discovered the scorpion or snake like object in the medicine bottle and brought the Doctor’s notice immediately. The Doctor tried to hush up the matter and asked Serajul to throw the medicine immediately.

But the patient’s father drew the staff’s attention at the Niramaya counter who retorted how would have they known what was inside a black bottle. They asked Serajul to file a complaint before the medicine supplier.

When Serajul failed to get any fruitful outcome after contacting the Drugs Inspector, he lodged a police complaint at the Baripada Police Station in connection with the matter.

Reactions of the hospital authorities could not be obtained despite repeated attempts.