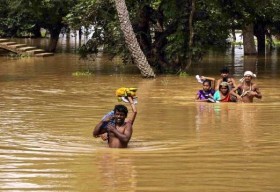 Patnaik asked the officers to deploy mobile patrolling teams to watch and protect the weak and vulnerable embankments.

He said people inundated in low lying areas must be evacuated to safer places well in advance and provision for free kitchen be immediately started for them.

The Chief Minister directed for deployment of required number of Disaster Response Forces of ODRAF, NDRF and fire services along with boats and other equipment in areas likely to be affected by flood to carry out rescue and relief operations.

He also directed the departments of Health and Family Welfare, Panchayati Raj and Drinking Water, Housing and Urban Development to ensure supply of safe drinking water and medical care to prevent outbreak of any water borne disease.

“Officials have been asked for readiness of around 60 multi-purpose cyclone and flood shelter homes in three districts. Besides, people in low lying areas would be evacuated to safety, if needed,” SRC Bishnupada Sethi said.

Due to rising water levels in the Baitarani river, villages under 12 blocks of Jajpur, Keonjhar and Bhadrak are likely to affected.

The administrations of the three districts have kept a close eye on the flood situation.

A total of 59 flood shelters including 43 in Bhadrak and 12 in Jajpur have been opened to accommodate people expected to be evacuated from low lying areas.

Four teams ODRAF have been deployed in the districts.