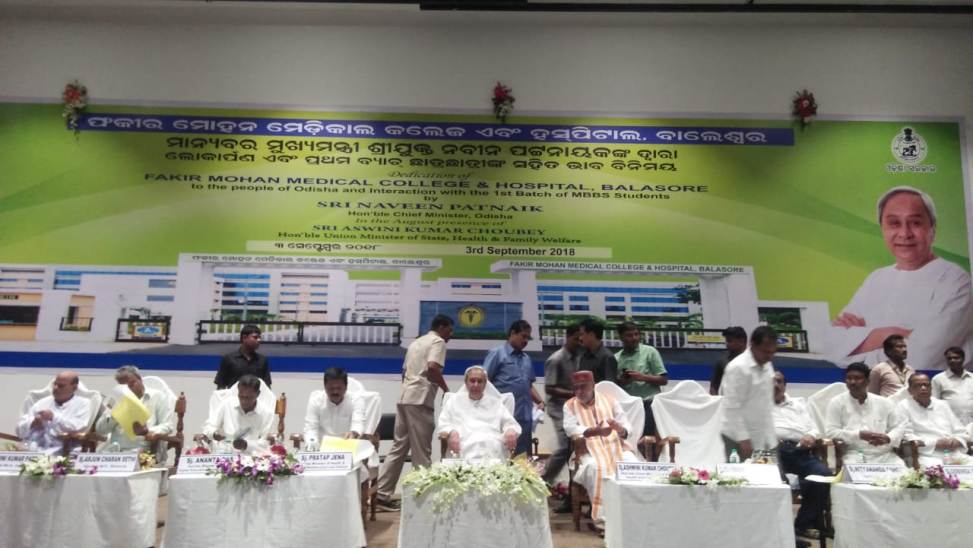 Balasore: The much-awaited Balasore medical college, which was recently named as Fakir Mohan Medical College and Hospital, was dedicated to public here today.

With the opening of the medical college, a long-cherished dream of Balasore and nearby areas has come true, said CM Patnaik.

Paying tribute to legendary Odia poet and novelist Fakir Mohan Senapati, he said the state government is committed to providing quality health service to all the citizens of the state.

“A new era has begun in Odisha in field of medical education. While the total MBBS seats were 321 in the year 2000, now the number has crossed 1,050 in the State,” Patnaik said.

The admission for 100 MBBS seats in the medical college has already begun from 2018-19 academic session.

Notably, the medical college at Balasore was built at an investment of Rs 198.51 crore, out of which State has spent Rs 133.26 crore and Centre has provided Rs 65.25 crore.

Similarly, the State has provided Rs 97 crore and Rs 18 crore was invested by Centre for construction of the Rs 115 crore-hospital project. The State has also provided 22.68 acre land for the medical college.

Two teaching hospitals to come up in Odisha

He said five medical colleges were approved in Odisha – Balasore, Baripada, Balangir, Koraput and Puri – and funds of Rs 558.6 crore has been released by the Central Government.

The Minister said it has been decided to establish one medical college each under Bhadrak, Jajpur and Dhenkanal parliamentary constituencies in Odisha.

Choubey requested the state government to identify land for the proposed medical colleges.

He also requested the Chief Minister to implement Ayushman Bharat scheme in Odisha.

Recently on August 28, the State government has named the medical college and hospital at Balasore after eminent litterateur Fakir Mohan Senapati.

Fakir Mohan Senapati known as ‘Vyas Kabi’ is regarded as father of Odia novel and short stories. He had immense contribution for development of Odia literature.

On August 31, the CM Patnaik had inaugurated the Bhima Bhoi Medical College and Hospital in Balangir to provide better healthcare facilities to people in western Odisha regions.

Notably, the state government is implementing Biju Swasthya Kalyan Yojana from its own fund after rejecting the Central government scheme.