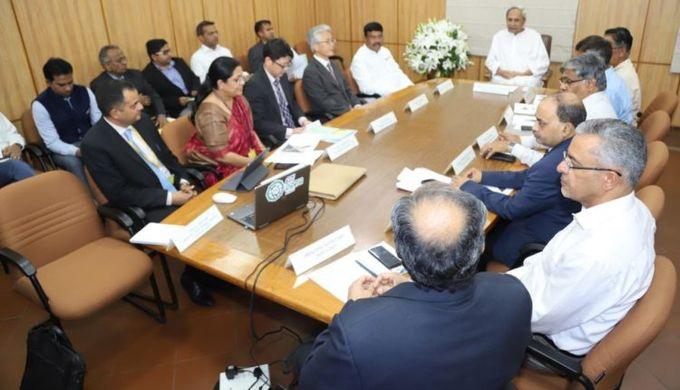 Bhubaneswar: Odisha Chief Minister Naveen Patnaik today proposed Japan to invest in sectors such as automobiles, food processing, chemicals and Petrochemicals in the State. During a high-level meeting at Loka Seva Bhavan here, the Chief Minister discussed about development of steel cluster and prospects of Japanese investment in steel and downstream industries in presence of Union Minister Petroleum, Natural Gas & Steel Dharmendra Pradhan and Japanese Ambassador to India Satoshi Suzuki.

The Chief Minister said at present Odisha is the highest producer of steel in India and the strong base of steel making in the State provides huge opportunity for ancillary and downstream industry. “Thus the State Government is now focusing on encouraging value addition in steel and stainless steel so as to achieve at least fifty percent value addition by the year 2030,” a statement issued by the Chief Minister’s Office stated.

The Chief Minister made an offer for an exclusive Japan Industrial Cluster and Township near Bhubaneswar for which the State Government will provide all necessary facilitation. The CM also urged the Japanese Ambassador to consider to be the partner country for the Make-in-Odisha Conclave-2020.

He expresses hope for wider and deeper engagement between Odisha and Japanese industries in the coming years.

Union Additional Secretary, Ministry of Steel gave a presentation about the new initiatives called Purvodaya which aims to drive accelerated development of eastern India through establishment of integrated steel hubs for which Odisha has the potential, the CMO statement pointed out.

The eastern belt has the potential to add more than 75 percent of India’s incremental steel capacity envisioned by the National Steel Policy, it further said.

Among others, Minister of Steel & Mines, Odisha, Prafulla Mallick, Chief Secretary Asit Tripathy and other senior officials were present.