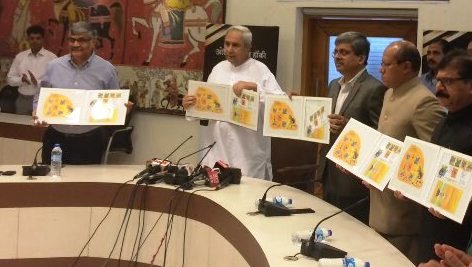 Bhubaneswar: Hours before the commencement of the first match of the Odisha Men’s Hockey World Cup at the Kalinga Stadium here today, Chief Minister Naveen Patnaik released five varieties of commemorative postage stamps based on the sporting event at the State Secretariat.

The stamps aim at commemorating the 14th edition of the Men’s Hockey World Cup in the state.

“I would like to thank the Postal Department for producing this beautiful stamp at the time of the Hockey World Cup,” Patnaik said on the occasion.

“A stall has been set up at the Kalinga Stadium from where citizens can get the new stamps. To promote the stamps, a state-level exhibition will be held at Keonjhar from December 15 to 17,” said Jaleswar Kanhar, Chief Post Master.

The Odisha Hockey Men’s World Cup Bhubaneswar 2018 will kick off today and end on 16 December. Host India will start their campaign against South Africa today on the opening day.