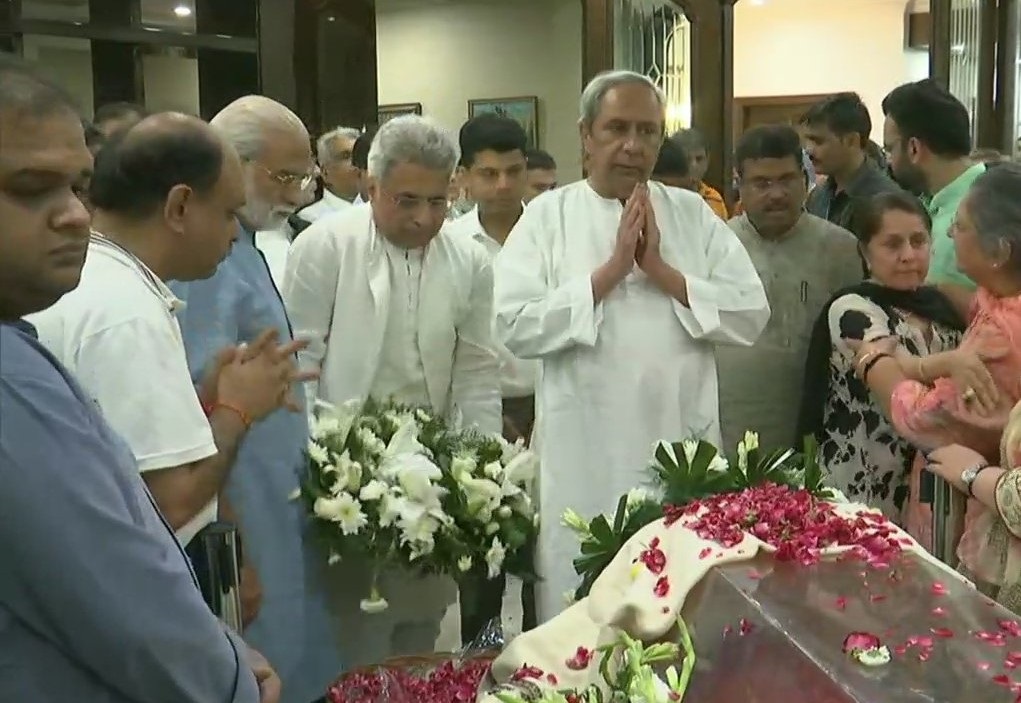 Odisha Chief Minister Naveen Patnaik recalled Jaitley as an “excellent parliamentarian, (and) a fine minister” who will be missed by many.

Deeply saddened to hear about passing away of former Union Minister Arun Jaitley ji. He was a distinguished lawyer, parliamentarian and an erudite person. His contribution to governance has been profound. Heartfelt condolences to the bereaved family, friends and followers.

Jaitley, 66, passed away at the AIIMS here after prolonged illness and is survived by his wife and children. The BJP stalwart’s body was later brought to his residence at Kailash Colony. Leaders cutting across political lines, BJP workers and his admirers filed past the body, which was kept in a glass casket, and offered flowers and wreaths.

“He was renowned even on the international stage. This country can never forget his contribution while he was a minister,” Rajnath Singh told reporters. “He was an asset to the party and the country. He is no longer with us and I offer him my respects,” the defense minister said.Patel said even though Jaitley was in a different party that had a different ideology, he was cordial with everyone. “There are very few people like him. Not only is his death a loss to the BJP, but also to the nation,” the Congress leader said.

“Jaitley was one of the finest politicians in the country. He was a great human being and an excellent orator,” Delhi Chief Minister Kejriwal said.”I shared very good relations with him. Nothing will be able to make up for this loss. Delhi will miss him,” the Aam Aadmi Party chief said.

Adityanath described Jaitley as a “sensitive” person, great orator and an astute politician who handled defence, law ministries and several portfolios with great ability. “It is an irreparable loss for the country and the party,” the Uttar Pradesh chief minister said. Shiromani Akali Dal chief Sukhbir Singh Badal and Union minister Harsimrat Kaur Badal were also present at the former finance minister’s residence. A number of Delhi BJP leaders, party MPs Gautam Gambhir, Rajyavardhan Rathore, Meenakshi Lekhi, Anurag Thakur and Parvesh Verma paid tributes to Jiatley. “We both fought students’ union election in the Shri Ram College of Commerce (SRCC). He became president and I became the secretary,” BJP leader Vijay Goel said. “Since then, I have shared a great relationship with him. “Verma said Jaitley’s demise was a massive loss to the nation. “We will continue to follow the path he showed, the West Delhi MP said. “He told us Rome was not built in a day and one needs to make continuous efforts to accomplish it. He loved me like a son.” (With PTI inputs)

Odisha to deliver the keynote of UN’s Disaster Resilience Week

Spending time on phone not so bad for mental health