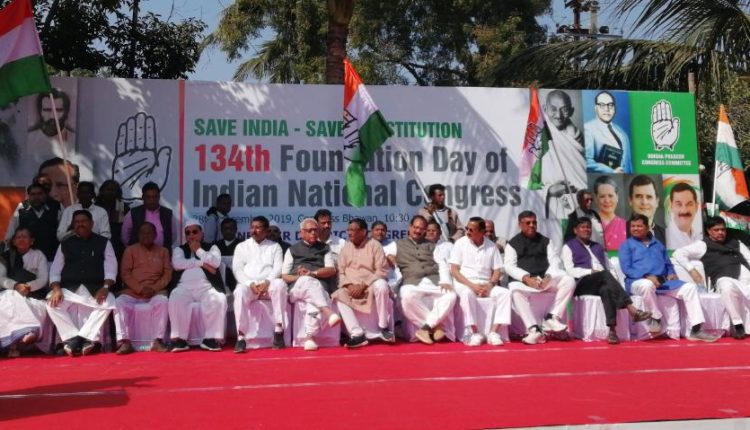 Bhubaneswar: The Congress celebrated its 134th foundation day today. On the occasion, Odisha Congress chief Niranjan Patnaik hoisted the party’s flag at its party headquarters in Bhubaneswar. The occasion was graced by many senior leaders, party MLAs and hundreds of party workers.

The Congress leaders said India has always come first for it and sacrifice for the nation stands above all else for the party.

Sacrifice for the nation stands above all else for the Congress party. From the time of our foundation, through the Indian independence movement & for all the days to come, India comes first.#CongressFoundationDay pic.twitter.com/jiw5DPOWoE

“The Constitution of India ensures secular and democratic values of its citizens. However, the values of the Constitution are in danger these days. Our priority is to save our constitutional values and we will fight for it,” said OPCC Chief Niranjan Patnaik.

“We will not let the BJP’s plans to succeed in making our nation a ‘Hindu Rashtra’. People of Odisha will also reject the polarization politics of BJP. They will vote in favor of Congress in coming municipal and panchayat elections,” said Congress MLA Suresh Routray.

The Odisha Congress then took out a flag march from party headquarters to Raj Bhawan to take its “Save Constitution-Save India” message to the people. Later a 33-member delegation of the party met Governor Ganeshi Lal and submitted a memorandum opposing Citizenship Amendment Act 2019.

On the occasion of the party’s foundation day, Rahul Gandhi will address a rally in Assam’s Guwahati whereas AICC general secretary Priyanka Gandhi Vadra will give speech at a meeting of party workers at Lucknow.