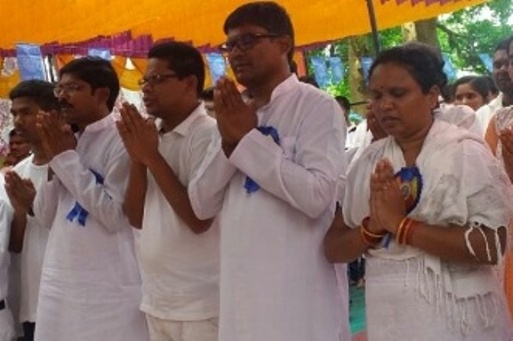 Along with family members, Sagaria changed his religion from Hinduism to Buddhism in a conversion ceremony held at his native place Buruja under Lakhmipur block in Koraput district.

Buddhist monks, nuns from across world walk in Odisha to protect environment

Around 60 families from Balangir, Keonjhar, Bhawanipatna, Kashipur, Nabarangpur, Kotpad, Pottangi and Damanjodi areas were converted to Buddhism along with the legislator and his family members during the two-day function.

On first day of the ceremony, the Buddhist monks attended a prabachan (discourse) programme. Sagaria and his family members were initiated into Buddhism in presence of Buddhist monks who had arrived from Raipur, Jagdalpur, Nagapur and Madhya Pradesh.

Earlier, Sagaria, his family members and 60 other families had submitted an affidavit before Koraput Executive Magistrate approval to embrace Buddhism.

Sources revealed that he had also met Swami Agnivesh and reportedly discussed about religion change. The latter is said to have guided his decision.

However, Sagaria termed the religion conversion as ‘home-coming’.

“I treat it as a home-coming not a conversion,” Sagaria said following the ceremony.