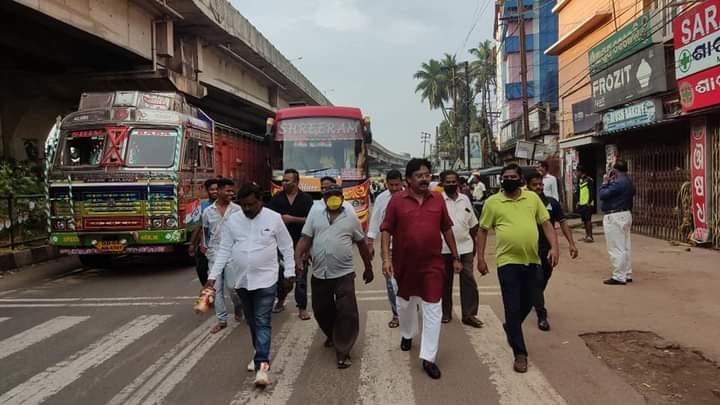 Addressing a presser following six-hour hartal by Congress demanding removal of Minister of State (Home) Captain Dibya Shankar Mishra, the Jagatsinghpur MLA claimed that the state-wide agitation was ‘successful’. He thanked people for their cooperation to the protest.

“Obeying Orissa High Court’s order, Congress activists observed the hartal in peaceful manner. But, the fight will not end here. It will continue in upcoming days. Congress will not sit silent till justice is done to Mamita Meher’s family and the minister concerned resigns from his post. The party will move to the High Court, if needed,” Biswal told reporters.

Hitting out at State Government, Congress MLA Santosh Singh Saluja from Kantabanji accused the CM of shielding Dibya Shankar Mishra. He termed CM Naveen Patnaik as ‘Dhritarashtra’ – a Kuru king visually impaired since birth and was emotionally misguided by his elder son ‘Duryodhan’.

“Family of Mamita Meher alleged that Minister Dibya Shankar Mishra was spending nights inside Sunshine Public School. But, police only arrested Govind Sahu and gave him chance for escape from custody. Now, the statement of Mamita Meher’s family has been modified. The CM who had earlier taken exemplary steps against his cabinet colleagues for corruption, is now unable to see immoral acts. The Government is trying to suspend Congress hartal by using police forces. The public will give a befitting reply to oust this Government led by a Dhritarashtra in coming days. The party will raise Mamita Meher issue in upcoming winter session of Odisha Assembly,” Saluja said at the presser.

“Those who challenged scheduled Odisha Bandh in the High Court were the BJD’s legal cell workers. The order of High Court should be applicable to all political parties. However, Congress succeeded in organising the hartal. The party will move to the High Court for justice to Mamita Meher,” he said.

‘Special Ops 1.5 – The Himmat Story’: A complex yet not intense tale that unravels organically