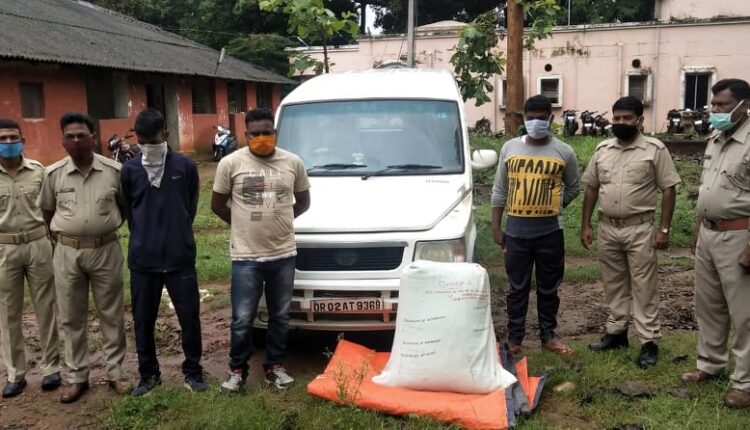 Phulbani:  A police Constable among three was arrested on charges of illegal possession of Ganja at Simili Sahi in Dimiriguda Gram Panchayat of Kandhamal district today.

Acting on a tip-off, police intercepted a SUV bearing number- OR02-AT-9369 at Simili Sahi and seized the contraband item weighing 30 kg from the vehicle. The cops also detained Constable Basanta Nahaka (42), Madhusudan Digal and Balabhadra Sahani (30) of Phulbani. Beside, fake currency notes amounting to Rs 1.13 lakh were seized from them.

Following the seizure, the Constable was placed under suspension and sent to Reserve Office.

A case was later registered at Phiringia police station under Sections 489(A),489(C) and 34 of IPC RW  Section 20 (B)(II)(C), 25 and 29 of NDPS Act. Further investigation is underway to arrest other persons involved in the ganja smuggling, sources said.