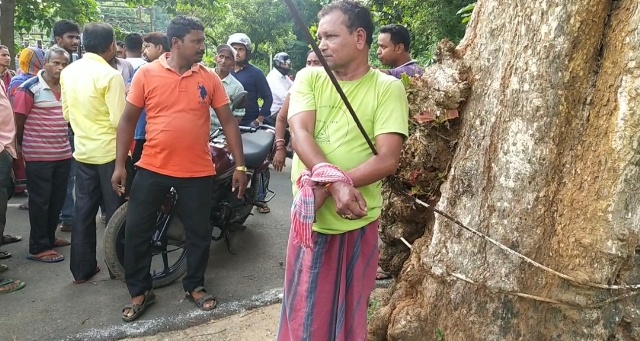 Baripada: A Grade-IV police staff was arrested by police for allegedly molesting a school girl here. The arrested cop, Jawaharlal Behera, has also been suspended from his service by SP Parmar Smit Parshottamdas.

Earlier yesterday, angry locals had tied him to a tree and thrashed him black and blue for his wrongdoing. Later, Baripada Town police had reached the spot and rescued the cop from the villagers’ clutch.

Sources said when a Class 8 girl was returning from tuition classes alone yesterday afternoon, Behera, a resident of Tanki Sahi misbehaved with her near the residence of the Collector. He later dragged her to a pump house and tried to outrage her modesty. However, she managed to escape from the spot and brought the matter before her family members.

Soon after, her family members and locals detained the accused, tied him to a tree and thrashed him hardheartedly. Later, a case was lodged against him at Baripada Town police station under Section 354 and 506 of IPC and Section 8 of Protection of Children from Sexual Offences (POCSO) Act.