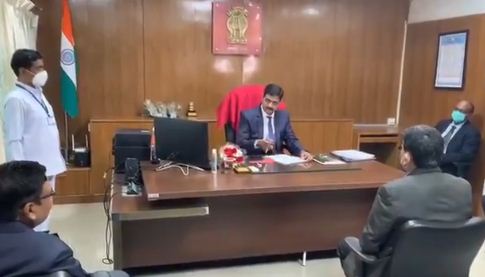 He took voluntary retirement from the police service yesterday after a 33-year-long career as a cop.

Took voluntary retirement from service today after serving long 33 years to join as Chairman, Odisha Public Service Commission. Thanks to Odisha Fire Service @OdishaFS_HGs_CD for a warm send off pic.twitter.com/9PNmc8DRSk

Mohanty belongs to 1988 batch of Indian Police Service of Odisha cadre. In a career spanning a period of 33 years, he has been posted as Superintendent of Police and Deputy Inspector General/Inspector General of Police in a number of police Districts and Ranges, respectively.

He served in the Vigilance Directorate, Transport Commissionerate, Police Academy, Police Housing Corporation, Police Headquarters and as Commissioner of Police, Bhubaneswar Cuttack. On elevation to the rank of Director General of Police, he has served as Director General, Prisons and Director, Correctional Services of Odisha, Special DGP, Intelligence and is currently serving as DG, Fire Service, Commandant General, Homeguards and Director, Civil Defence, Odisha.