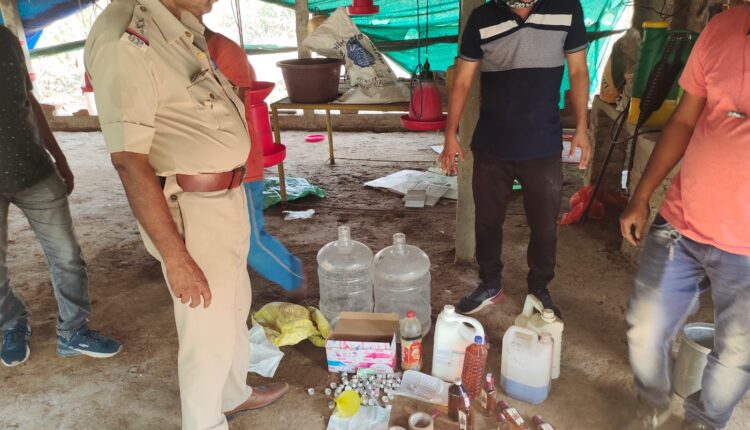 Berhampur: The Berhampur Town Police arrested an Armed Police Reserve (APR) Constable and two others today for their alleged involvement in manufacturing and business of spurious liquor in the town. The accused were later forwarded to the court.

The police examined the bottles containing liquor with Royal Stag brand label and found it duplicate. The bottles were packed in such a manner that the police team found it difficult to question on its genuineness, Pati informed.

The driver of the vehicle during questioning revealed he procured the spurious liquor bottle cartons near a poultry farm in Hanuman Nagar under Digapahandi police limits. Another person, who was engaged to prepare the spurious liquor, was also present in the auto-rickshaw. The other person, identified as Babu Sahu was accompanying the driver to deliver the liquor consignment to a place in town, added the SDPO.

The two persons took the police team to the poultry farm in Hanuman Nagar from where the cartons containing duplicate liquor bottles were loaded in the auto-rickshaw. Raw materials including spirit, bottles and caps were recovered from the spot.

The preliminary investigation showed the land on which poultry farm is located belongs to the father of Chinmin Barik, an APR Constable.

The SDPO further said Chinmin Barik was actively engaged in selling the spurious liquor. Babu Sahu, who was detained by the police along with the auto-rickshaw driver revealed that he was employed by Chinmin Barik to prepare duplicate liquor and deliver it in different places.

Barik was working with the bomb disposal unit of the Odisha Police.

Investigation is going on to find out involvement of other people in the case. Also, the Berhampur Town Police will recommend the Superintendent of Police to take action against Barik, the SDPO added.