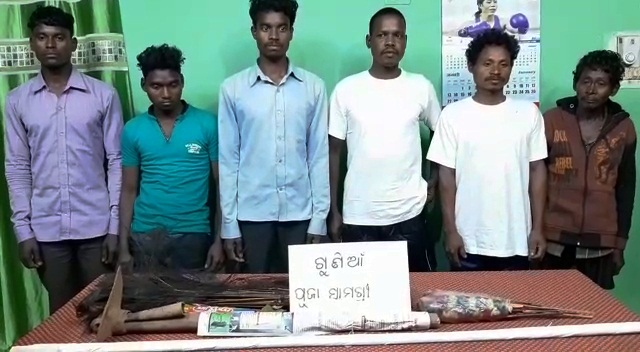 Rourkela: The Koira police cracked the sensational murder of a woman and her four children with arrest of six accused persons here today.

Clearing the suspense over the murder, the police said that the woman along with her four children was killed on suspicion of practising sorcery.

The police arrested six persons in connection with the murder. They are Dagma Munda, Raju Munda, Salu Munda (three siblings), Debra Munda and the sorcerer Budura Munda. The murder was over sorcery practice after Debra Munda’s one daughter died and another fell ill, said the Sundergarh DIG (western range) Kabita Jalan.

The probe is underway. If others would have been involved in the case, will be arrested soon, she said.

Shocking! Man stoned to death by 2 sons in Odisha

The accused confessed to the crime saying they killed the four following instruction of their sisters and the sorcerer.

The murder took place at around 7.30 pm on January 25 at home of Sidia Munda, at Indupur village under Koida Police limits in Sundergarh district.

“We four barged into the house and killed the woman first and then her children. After consulting one of our associates Motu, we threw the bodies into well on premises of the house. We killed the four after our sisters told us that the woman is practising sorcery for which their one daughter died and another is battling for life,” said Raju Munda, one of the accused in the murder.

Notably, Kuni Munda of Indupur village and her four children aged below 10 years were found dead on Jan 26 morning under mysterious circumstances. They were dumped in a well adjacent to the house.

When the woman’s husband Sidia Munda reached the house late in the morning, he found blood stains on the floors and the bodies inside the well.

4 youths brutally attacked on suspicion of cattle theft in Cuttack