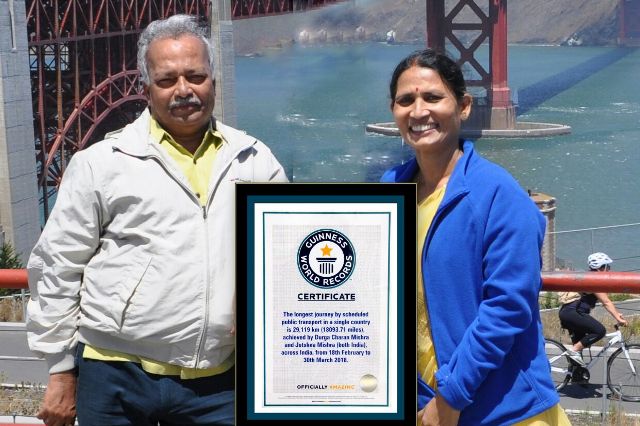 Puri: A couple from Puri district of Odisha entered the Guinness World Records for the longest continuous journey by trains and buses across the country.

Durga Charan Mishra, a retired official in the Association of State Road Transport Undertakings (ASRTU) under the Ministry of Transport, and his wife Jyotshna Mishra continuously travelled 29,000 km in 42 days.

Recently, the Guinness World Records authorities handed over the certificate to the couple for achieving the feat for second time.

With the achievement, the couple broke previous record of Romanian couple who had travelled 9,261 km.

The Mishra couple said that they will shortly apply the Guinness World Records authorities to approve them as the only couple in world to set the record twice.

Earlier, Durga Charan Mishra and his wife were placed in the Guinness World Records for the longest journey by car in a single country. They set the record by travelling 18,458 km in car throughout India in 2014.

Prior to their record in the Guinness Book of Records, the Mishra couple had achieved the success in Unique World Records by travelling 21,146 km on a bullet in 2013.

A year ago, the couple had planned to travel the longest distance in bus and train. In this regard, they had informed the Guinness World Records committee that made few guidelines for the record.

As per the guidelines, the couple was only allowed in government buses and passenger trains. They were strictly prohibited to visit by trains like Rajdhani and Duronto express and tourist or private taxis.

They began their journey from Puri by train at around 9.25 am on February 18. During 42 days, they travelled to various places in the States including Assam, Tripura, Nagaland, Gujarat, Jammu & Kashmir and Kerala. They reached Puri at 8.18 pm on March 30.

The couple was visiting the tourist destinations from railway stations or bus stands by walk. They were halting only on railway platforms. A two-member panel was keeping close watch on their movements through GPRS.