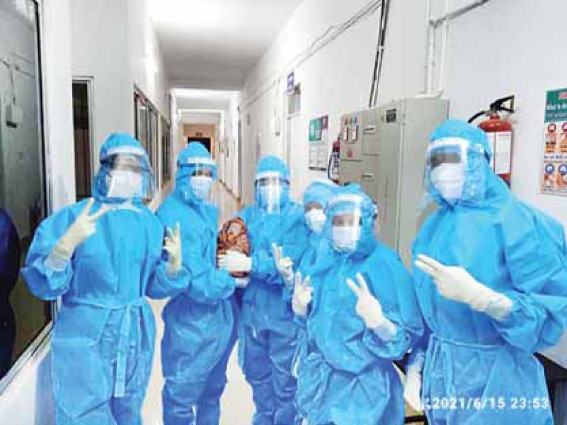 Phulbani: An expectant mother on ventilator support at a COVID Hospital gave birth to a baby girl in Odisha’s Kandhamal district. Both the mother and the newborn are stated to be stable.

Reportedly, a 38-year-old woman of Kilupanga village under Phulbani block was admitted to COVID ward of the District Headquarters Hospital (DHH) here recently after she was found infected with the virus.

She was later kept under ventilator support after her condition deteriorated. In fact, her SpO2 level had dropped to 55 % making it a major challenge for doctors at the hospital to save her life, said hospital sources.

At around 11.45 pm on June 15, she complained of labour pain. Soon after, a team of doctors, including senior doctor Satya Narayan Samal and nurse Bijayeeta Digal  performed a C-Section for her delivery. The COVID-infected woman delivered a healthy baby girl. Later, doctor shifted the mother to ICU and her baby to SNCU.

Doctors at the hospital are constantly monitoring their health condition, hospital sources added.

Odisha: All you need to know about COVID vaccination for foreign-bound people