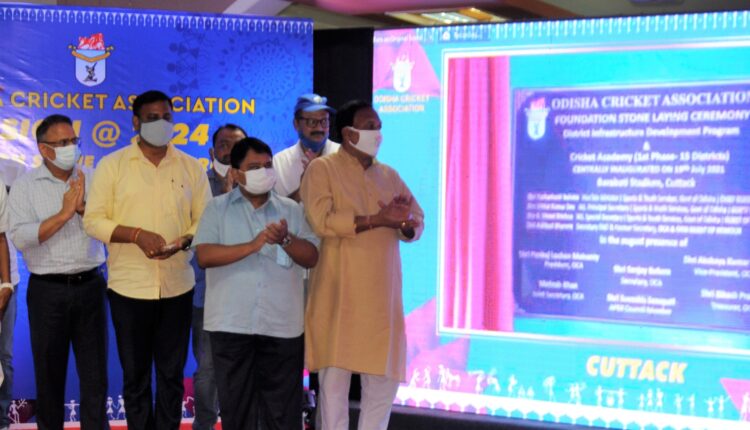 Cuttack: The Odisha Cricket Association on Monday conducted the First Phase of the Foundation Stone Laying Ceremony of District Infrastructure Development Program and Cricket Academies in accordance with their much ambitious [email protected] project.

The meeting was centrally conducted inside the OCA Conference Hall Premises on a virtual platform and was live-streamed across social media platforms.

In this meeting, an AV file was played which showcased the phenomenal progress that the OCA has made in the last couple of years. The video also featured messages from eminent international cricketers from Odisha like Debashish Mohanty, Shiv Sundar Das, Sanjay Raul and Pragyan Ojha.

“The professionalism and spirited culture developed in the recent times has evolved OCA as most pro-active association in our country. This has inspired me to join hands with Odisha Cricket as the Chief Coach,” said Jaffer.

The foundation unveiling ceremony across 15 districts were centrally inaugurated from Barabati Stadium, Cuttack.

The [email protected] project aims at providing turf wickets across the State which will provide equal & uniform opportunities to enhance the performance of aspiring cricketers of Odisha.

Since turf wickets is a prerequisite in modern-day cricket and due to scarcity of turf wickets in our State hampering the progress of our cricketers at State and National level, the OCA is undertaking this initiative to help develop Turf-Wickets across the State which will eventually nurture and mould the future upcoming cricketing generations of Odisha. In addition to this, the OCA is also planning to supply cricket equipments, training equipments, pitch essential equipments and ground equipments.

The OCA is also going to appoint a qualified coach for the respective Cricket Academies in each district who will spearhead the development and progress of cricketers and help impart their knowledge and expertise to foster the talents and mould them into established cricketers.