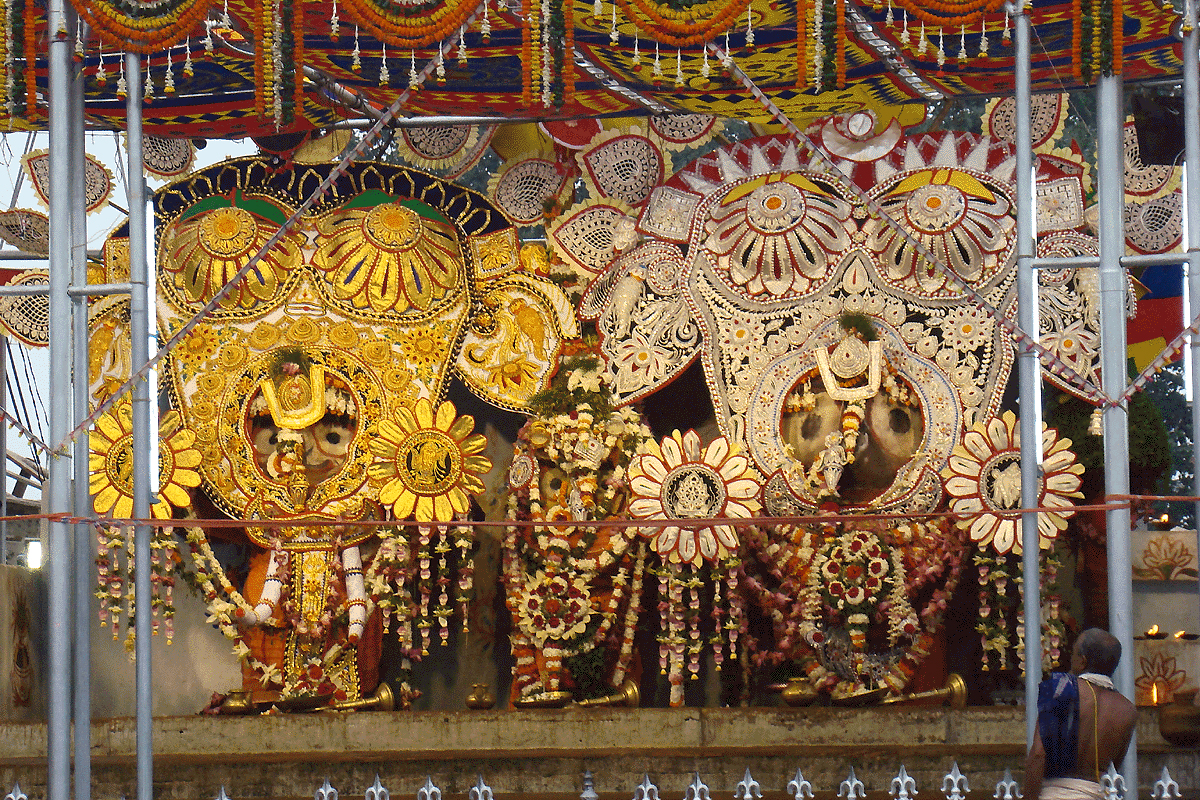 Puri: A sea of devotees thronged Odisha’s pilgrim city Puri to have darshan of Lord Jagannarh in Gajanan Besha (elephant attire) or Hati Besha on the occasion of Deba Snana Purnima today.

After having holy shower on the Snana Mandap, situated near Ananda Bazar on the premises of Srimandir, in the afternoon, the deities were dressed like Lord Ganesha, who bears head of an elephant. The elephant costume is known as ‘Gaja or Hati Besha’. While Lord Jagannath and Balabhadra were dressed like elephant, their sibling Devi Subhadra gave the darshan in lotus flower besha.

Prior to the Hati Besha, the rituals were conducted after Jalabhiseka (bathing ceremony). As per rituals, the deities were accorded a bath with 108 pitchers of aromatic water by a group of servitors. While the servitors poured 35 pots of water on Lord Jagannath, Lord Balabhadra had shower with 33 pots of water, Devi Subhadra with 22 pots of water and Lord Sudarshan took bath with 18 pots of water.

Later, the servitors decorated the deities with flowers and Tulasi (holy basil). King Gajapati Dibya Singh Deb, the first servitor of Lord Jagannath, visited the Snana Mandap from his palace in Tanzan to pay obeisance to deities. He performed chhera pahanra (sweeping of the floor) at the pandal, one of the major rituals ahead of Gaja Besha, with the priests chanting mantras.

The costumes of deities for the Hati Besha were prepared by the artisans at Raghaba Das mutt and Gopal Tirtha mutt on Snana Purnima. The Gajanan Besha of Lords was completed at around 5.20 pm.

According to researchers, the Lord of Universe had given darshan to Ganapati Bhatt, a staunch devotee of lord Ganesha, on the Snana Mandap on the auspicious occasion of Snana Purnima. In 15th century, Pandit Ganapati Bhatt of Mahaganapatya community had visited the century old shrine in Puri to have darshan of Lord Jagannath. He witnessed Chaturdha Murti (Lord Jagannath, Balabhadra and Goddess Subhadra along with Sudarshan) on Snana Mandap on Snana Purnima. However, he could not get satisfaction as he wanted to see his Lord Ganesha within Lord Jagannath. While he was on his way back with disappointment, Lord Jagannath disguised as a priest insisted him to return the temple where he can see his Lord Ganesha. He was overwhelmed to have darshan of his Lord within Chaturdha Murti on Snana Mandap. Since that period, the deities are being decorated in shape of elephants (Lord Jagannath and Balabhadra appear as black and white elephants respectively) every year followed by holy bathing on Jyestha Purnima.