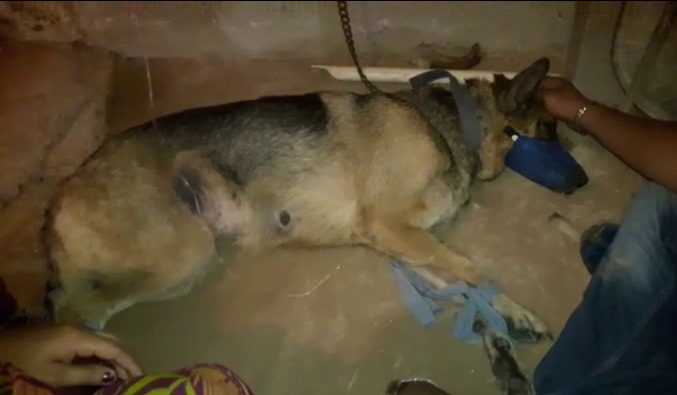 Bhubaneswar: A pet dog put her life at risk by fighting with a poisonous snake to save her master’s life here in the state capital.

The brave dog managed to overpower the snake and drove it out of the house.

Though the rare sight — fight between a dog and snake — has not been recorded, but the entire episode could be visualised when narrated by the dog owner Sambit Das, a resident of Patitapaban Nagar in Badagada canal road.

According to reports, the 3-year-old dog (of a German Shepherd breed) attacked a 5-ft-long cobra at garage while the latter was trying to enter the house of Sambit. The pet foiled the reptile’s efforts with continuous attacks. In retaliation, the snake was also trying to sting the dog. The fight between the two lasted around 30 minutes.

In the battle, the dog survived and the snake sustained injuries.

The owner, who was witnessing the entire scene, contacted the snake helpline following the cobra moved out of the garage. The snake helpline member Subhendu Mallick reached the house and rescued the wounded cobra.

Meanwhile, the dog owner took his pet to a veterinary hospital for treatment suspecting it to have snakebite in the encounter.

“We rushed to the OUAT veterinary hospital after the battle to save my pet. The dog was administered an IV fluid and anti-venom injection as part of treatment for suspected venomous snakebite. Though the dog appears to be doing well after treatment, we will keep constant watch on behaviour and condition of the dog to examine the presence of snake venom inside its body,” said the dog owner.

Three of family die after consuming poison in Odisha’s…