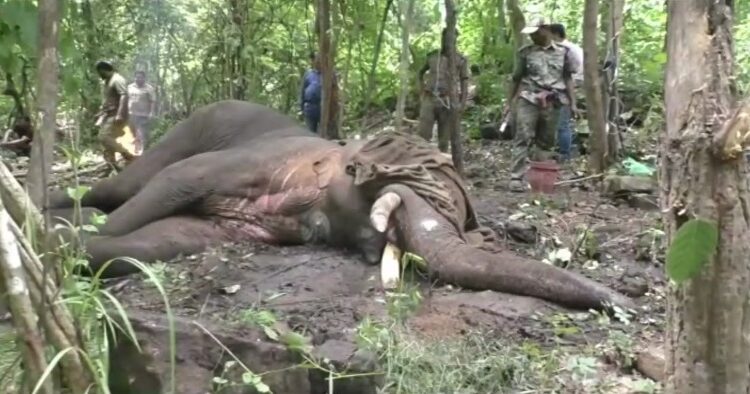 Cuttack: A tusker which was found with multiple pellet injuries in Barsigaon forest of Narasinghapur Forest Range under Athagarh Division in Odisha’s Cuttack district died while undergoing treatment, today.

A team of experts was treating the elephant as the pachyderm had sustained gunshot wounds. Reportedly, as many as six pellets had hit the animal injuring it severely.

Sources said few locals first spotted the tusker roaming around with acute pain inside Barsigaon forest and immediately called up forest officials. On receiving information, a team of forest officials reached the area and attempted to tranquilize it. However, they failed to control the pachyderm. Seeing the huge crowd, the elephant ran deep into forest.

However, officials later managed to tranquilize the tusker. A team of veterinarians was later engaged to provide treatment to the wounded elephant in presence of forest officials.

It may be mentioned here that an elephant had succumbed to bullet injuries in Narasinghpur Forest Range under Athagarh Division, last month.

Meanwhile, local residents and wildlife lovers have expressed strong discontentment over frequent elephant deaths in the area and demanded immediate arrest of the culprits.