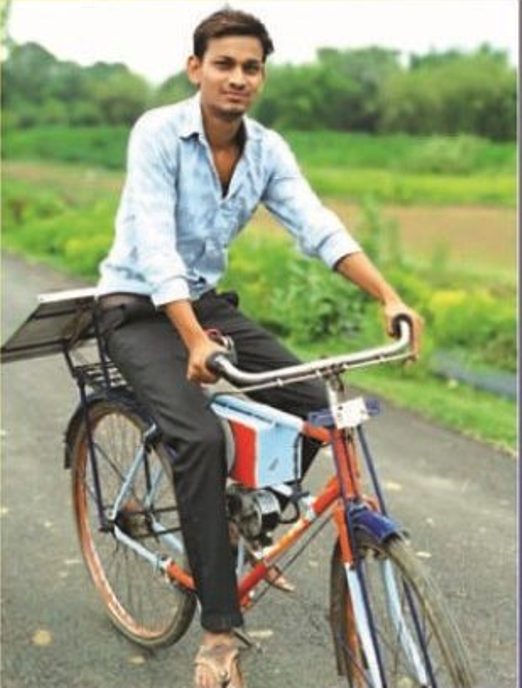 Bhadrak: In view of increase in oil prices and environment pollution, a young engineer in Odisha’s Bhadrak district developed a bicycle that runs on solar upto 30 km per hour.

Rakesh Nayak, a native of Kulana village in Tesinga panchayat under Bhandaripokhari block in Bhadrak district, made his village proud by developing solar-powered bicycle.

The youth, the son of Subash Nayak, who is a music teacher and farmer, and mother Pramila Nayak, has completed his diploma in electrical engineering from Barapada School of Engineering & Technology in Bhadrak district.

He made research and developed a solar-powered bicycle after his father could not afford to bear fuel expenses for his bike. He explored several ways to complete his mission and finally he developed the bicycle just in two months using his technical skills.

Rakesh used a solar panel; four 12-volt batteries and a switch connected with 24-volt DC motor and electric accelerator for start and off in the cycle. It also features horn and light switches. The cycle can also run through pedal.

He has spent about Rs 15,000 to design and build the solar-powered bicycle.

The young man has been receiving applauds from various quarters for his innovation.

The solar-powered cycle can run upto 30 km per hour, Rakesh said adding that the bicycle could be upgraded with many more features if he receives financial support from any company or government.