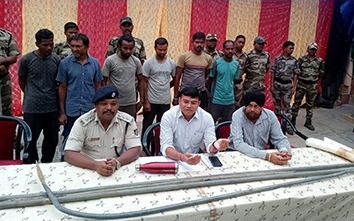 Rourkela: At least six persons, including a farmer, have been arrested in connection with the death of a tusker at a forest under Banki range in Odisha’s Sundargarh district September 9.

The police and officials of Forest department have seized several sharp weapons from the arrested persons, sources said.

According to sources, the tusker had been unleashing a reign of terror in Tunguri forest area under Banki range of Sundargarh for last several days.

The arrested farmer and five others had attacked the elephant with spears and arrows while the pachyderm was destroying crops on a farmland during the wee hours of September 9.

The tusker sustained grievous injuries in the attack and died inside the forest. Its carcass was found from near a nullah later in the day, sources added.

“We came to know about details regarding the death of the tusker during investigation and arrested six persons for their involvement in the crime,” said an official of the Forest department.

Over 100 property offenders arrested in Bhubaneswar in one month