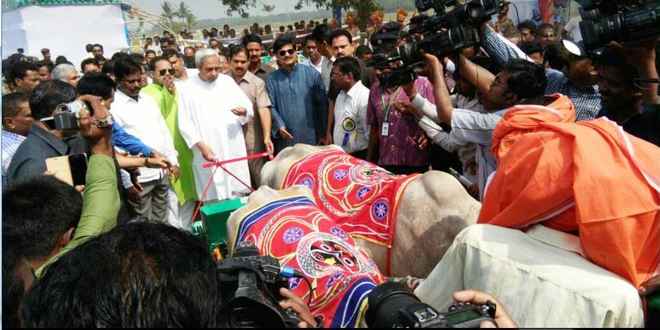 As per a report of Union government, the income of the farmers in the state has increased by two times in the last 10 years and we will make further strides in the coming years, Patnaik said.

“On this occasion, I extend my warm greetings to the farmers of our state. Farmers’ welfare and empowerment is something very close to my heart. I have directed the District collectors to give priority to farmers’ issues. We have made significant progress in terms of production, productivity and income generation. Keeping the momentum, we will make further improvement in coming years,” Chief Minister Naveen Patnaik said.

The government has set up two corpus funds of Rs 100 crore each – one for seeds and other for fertilizers. Besides new agriculture policy and special budget for farmers, the government provides crop loan at one per cent interest rate, he added.

Patnaik also ran the ceremonial plough on the occasion.

Agriculture Minister Pradeep Maharathy who had recently courted controversy for his statement on farmer suicides said the state government is mulling farm loan waiver and crop insurance of farmers.

“We would step up our efforts to increase productivity from 1.18 MT to 1.50 MT. We are at the service of farmers. I would live up to my words till I am at the helm of affairs,” Agriculture Minister Pradeep Maharathy said.