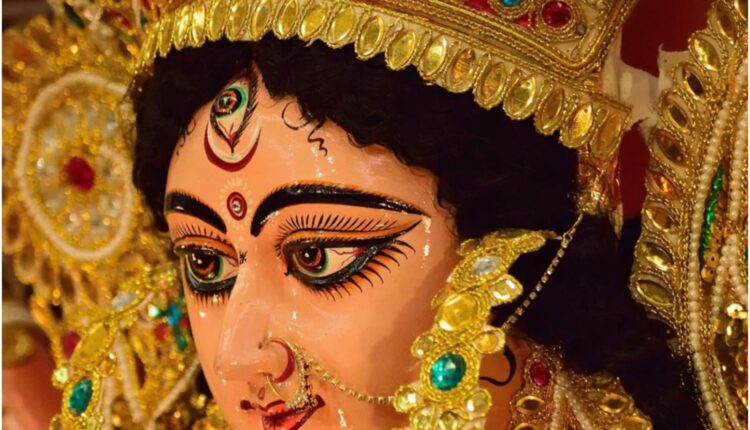 Cuttack: Presenting a unique example of communal harmony, Cuttack’s Banka Bazar-based Aslam Alis family in Odisha has been making tableaux or jari medha for Durga Puja in the silver city for generations with the same vigour and devotion.

Ali said his entire family has been engaged in the preparation of various decorative items made up of polythene, thermocol and ropes etc for Durga Puja. Besides, they also design headgear and jewellery for Goddess Durga and other deities throughout the year.

The family has got contracts from various Puja Committees in Cuttack, Bhubaneswar, Rourkela and even Hyderabad as people love their finished work, he said.

“We have been doing the work for the last four generations. During my childhood, my grandfather used to do jari medha. He had also been felicitated by the British government for his fantastic work. I have heard that my grandfather’s father was also doing the same job,” Ali said.

Following the demise of Aslam Ali’s grandfather, his father took over and now his entire family is busy preparing the decorative items.

“We feel happy doing such work which further strengthens our brotherhood. Because of this work, we get a chance to meet renowned persons of our society and they also felicitate us,” said the Muslim artist.

Due to the Covid-19 pandemic, the business has been affected during the past two years. However, due to God’s grace, the business was not fully stopped, he said.

Sayeeda Bibi said she has been part of the preparation of jari medha for more than 25 years. “When I was a kid, I saw my uncle making jari medha. So, I learnt the art of making jari medha from my uncle. We do it not just for the sake of keeping the traditions of our forefathers alive but we enjoy it,” she said.

She is part of the many Muslim families who have been designing the tableaux in Durga Puja pandals for generations.

Rehmat Khan (62), another Muslim artist, said he started doing the tableaux when he was 18 years old. The Puja organisers also treat them nicely and there are no differences, he said.

It can be said that the Durga Puja festivities in Cuttack are incomplete without the Muslims. Undeterred by any religious intolerance, the Muslim artisans of the city have been designing the backdrop of the Durga Puja Pandals every year.

Not only for Durga Puja, they also prepare similar items for other Pujas like Laxmi Puja, Kali Puja, Ganesh Puja. The rest of the days, they prepare mukuts (headwear) for Hindu grooms and brides.