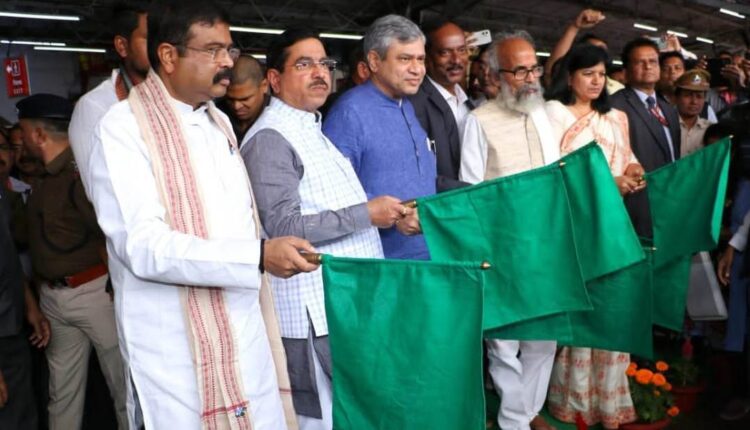 Speaking on the occasion, Pradhan and Joshi praised Vaishnaw for utilising electronics and information technology in the railways and speeding up of the infrastructural development in the country by laying new lines and redeveloping the railway stations

“Priority is being given to the development of railways in Odisha. Now, the state is getting more than Rs 10,000 crore annually for the development of railway sector. It was getting only Rs 700 to 800 crore in a year for the sector before 2014. Now, Indian Railways is constructing around 300 Km rail line in a year instead of a mere 20 to 30 Km earlier. Apart from this, 36 railway stations of Odisha are now being upgraded with modern facilities. The Jagannath circuit train will also run within a few days,” Vaishnaw said.

Bhubaneswar railway station will have modern facilities and infrastructure as part of the redevelopment process. The project would be implemented in 24 months, added Vaishnaw.

In another function at Angul station, Chief Minister Naveen Patnaik flagged off a new express train between Sambalpur and Shalimar via Talcher, Dhenkanal and Bhadrak in presence of Pradhan, Joshi and Vaishnaw.

Later, the 14-Km long Angul-Balaram new railway line was inaugurated by the three Union Ministers. Angul-Balaram railway line will provide facilities for the transportation of freight especially coal to the different industries and power plants of the country and add generate additional revenue for the government.