Odisha gears up for conservation of Olive Ridley turtles 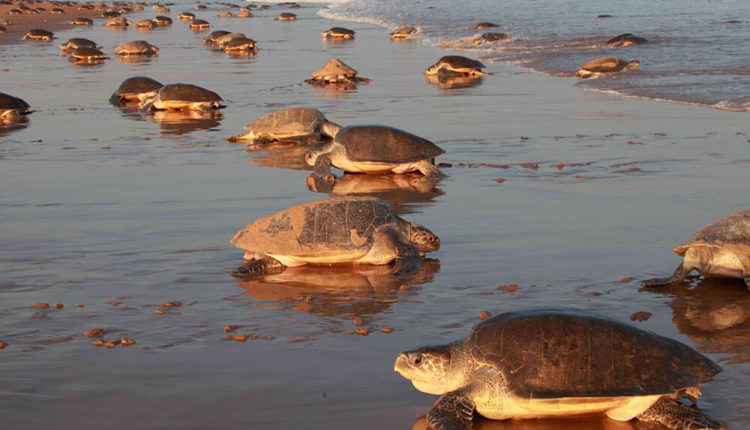 Bhubaneswar: The Odisha government has geared up the efforts for the protection and conservation of the endangered Olive Ridley turtles during the mass nesting.

The government directed the departments of Fishery, Forest and Marine police to operate in close coordination and ensure strict enforcement of the conservation rules.

Chief Secretary Asit Tripathy on Thursday chaired a meeting of the high power committee for protection and conservation of Olive Ridley turtle.

The Coast Guard was requested to have realtime intelligence sharing with the departments about any illegal fishing.

The institutions like Integrated Test Range, Defence Research and Development organisation (DRDO), Dhamara Port, Gopalpur Port and Paradeep port authorities were requested to follow the black-out and light deeming practices to save the turtles from possible delusion.

The Chief Secretary advised all concerned departments to take pride for sea turtle conservation and make it another modern identity of Odisha.

He said it should be molded to a mass campaign through active people’s involvement so as to make brand it with Odisha.

Notably, the state government has already imposed a seven-month ban on fishing from November 1 to March 31 next year.

It has decided to pay a compensation amount of Rs 7,500 to around 8,000 fishermen families who will bear a loss for fishing ban.

The Chief Secretary directed the concerned departments not to cause unnecessary harassment to the small traditional fishermen without powerboats and catch hold of the real criminals who cause damage to the life of turtles.

Principal Chief Conservator of Forest (PCCF) Sandeep Tripathy apprised that fishing by the trawlers with 30 HP or more would be banned up to 20 kms inside the sea, particularly in Olive congregation area and their buffer zones in three river mouths namely Dhamara, Devi and Rushikulya.

The meeting deliberated on Action Plan for 2019-20. It was decided that wide awareness activities would be undertaken for the purpose. A central monitoring unit would be set up in the office of the PCCF, Wildlife.