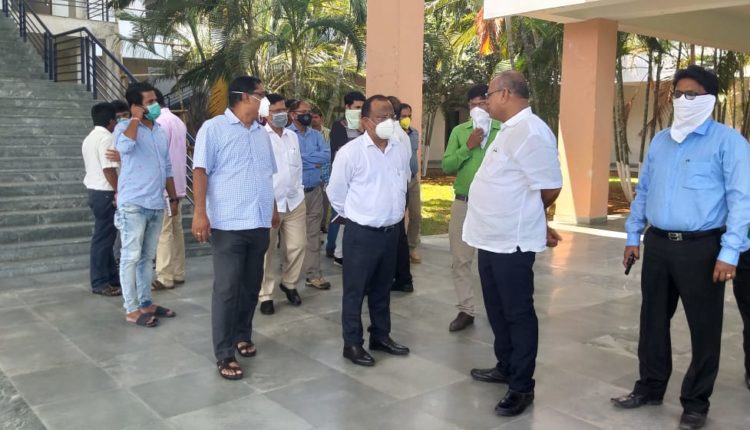 Bhubaneswar: Amid fear of community spread of the coronavirus looming large following a man with no history of travelling abroad tested positive for COVID-19 in the state, the Odisha government has taken a series of measures including augmentation of hospitals’ capacity to combat the crisis, officials said.

With financial assistance from the Mahanadi Coalfields Ltd (MCL) and the Odisha Mining Corporation (OMC), an elaborate arrangement has been made to set up two dedicated hospitals for COVID-19 patients with a total of 950 beds in the state capital, he said.

A similar facility with 700 beds will also be established at Tangi near Cuttack for people suspected to be infected with coronavirus.

This apart, the All India Institute of Medical Sciences (AIIMS), Bhubaneswar, is all set to make available an exclusive unit with 206 beds in its campus for treatment of such patients.

Around 20 ventilators are kept ready while orders have been placed for 40 more which will be delivered by next month, AIIMS-Bhubaneswar Director B Gitanjali said.

“We have sufficient consumables and kits to deal with the emerging situation. We have also set up a dedicated COVID-19 screening OPD for suspected cases,” she said.

The institute will introduce tele-medicine programme for providing necessary information to people on the deadly virus, the official said.

“AIIMS, Bhubaneswar has also been permitted to conduct tests for COVID-19, and the institute has already started examining samples free of cost,” she said.

Moreover, arrangements at the Ayush complex of AIIMS, Bhubaneswar for an isolation unit have been made as part of its measures to grapple with the emerging situation, she said.

Similarly, the government has decided to temporarily reserve around 500 beds with ICU facilities, exclusively for COVID-19 patients, in Ganjam district, which witnessed influx of a large number of migrant workers from other states.

The state government’s drive to contain the outbreak gained momentum after detection of the third COVID-19 case in the state on Thursday, another official said.

“During phase-1, the focus was on foreign returnees and later the surveillance has been shifted on people coming to Odisha from other states. Now, with the third confirmed case having no history of travelling abroad, we see a possibility of the outbreak moving into stage 3, which is community transmission,” the state governments chief spokesperson on COVID-19, Subroto Bagchi said.

What is “really alarming” is that the man visited three hospitals in Bhubaneswar.

The Ganjam district administration has identified the Tata Memorial Hospital, Sitalapalli, Science College at Chhatrapur and Women”s College at Bhanjanagar to convert these facilities as COVID-19 care units, a health department official said.

In addition, a total of 274 beds has also been reserved exclusively for the Covid-19 patients in the government hospitals, chief district medical officer R.Jagadeesh Patnaik said.

Steps are also being taken to put in place a large number of additional beds with proper facilities in other parts of the state for treatment of COVID-19 patients, the health department official said.

The state government has set up 7,276 temporary medical camps in all the 6,798 gram panchayats with necessary facilities to tackle any emergent situation, he said.

The government has also decided to engage microbiologists on a temporary basis to ensure the smooth functioning of the district public health laboratories and collection of blood and swab samples, the official said.

The newly-appointed medical officers, who have not joined the services in their respective places of posting, have been directed to join immediately, he said adding that the state government has allowed one-time relaxation for promotion of medical officers under the Dynamic Assured Career Progression (DACP) scheme.

Lauding the role being played by the doctors amid the COVID-19 threat, Chief Minister Naveen Patnaik said, “Their contribution is praiseworthy. Though the promotion of medical officers under the DACP scheme was announced a year ago, they could not get promotions under this programme due to want of required PARs (performance appraisal report).”

In a bid to infuse professionalism to its efforts to contain the spread of the deadly virus, the Odisha government has invited expression of interest to engage healthcare experts for managing the crisis in the state.