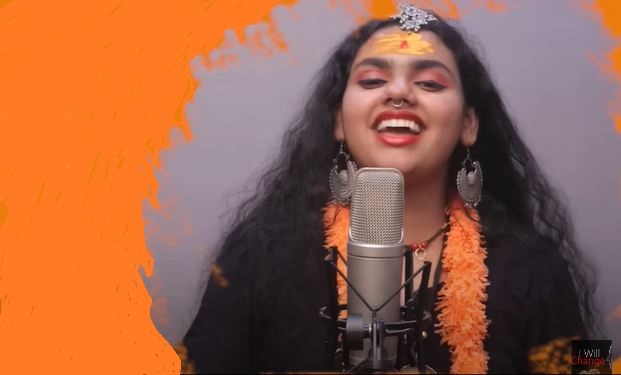 Bhubaneswar: Abhilipsa Panda has earned praises from all sections of the society for her singing of Bhajan ‘Har Har Shiv Sambhu’. The song, that has gone viral of social media platforms, was composed based on Shiva Stotram.

The video has garnered over 34 million views on YouTube in less than two months of its upload. Along with Abhilipsa, Jitu Sharma from Barbil locality of Keonjhar district has rendered his voice in the musical video.

According to sources, Jitu had prepared the musical video in April 27 including one more titled ‘Manzilen Kedarnath’. Jitu has made the video song conforming to the style of Western society. While he was on the lookout for a fresh voice, he approached teenager for his project after coming to know about her from media reports.

Abhilipsa had made it to headlines after she bagged Odisha Governor’s trophy.

“Main motive behind the making of this video song was to bring Stotras of different deities to the fore and present those before people in new forms – especially the younger generation, which have gone into oblivion over years,” Abhilipsa expressed.

She will keep on entertaining the music lovers of Odisha if she would get more such opportunities in future, the latest singing sensation added.

Abhilipsa is the daughter of Ashok Panda from Tentalabahal village under Reamal block of Deogarh district. Ashok presently works as chief security officer in a private company in Barbil after his retirement from Indian Army. His family, however, stays in Joda.

The young singer has appeared for Plus Two (Science) final exams and is awaiting her results.

She was fond of music from her very tender age and has also participated in a number of reality shows.

“The rendition of the song is really unique and I really like the way it has been sung. It is very different from its genre,” Rahul Sahu, a music lover opined.

The video can be watched here.