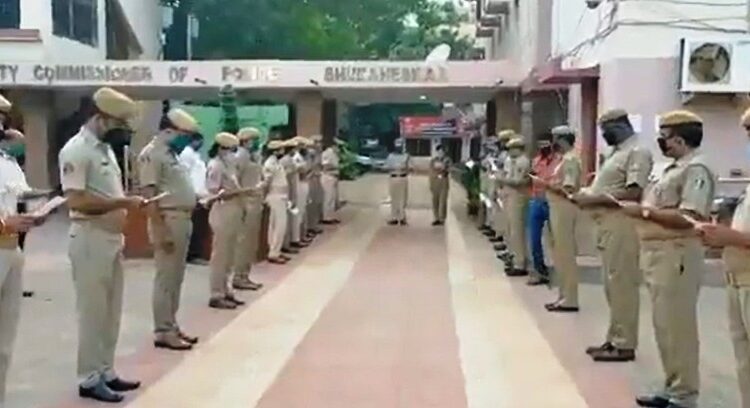 Bhubaneswar: While Central Government is making efforts to prevent nationwide protests over implementation of Agnipath military recruitment scheme, Odisha Government is yet to decide on providing reservation for Agniveers in State Police Service.

“No such policy has been framed so far. The State Government is contemplating it,” said Home Minister (MoS) Tusharkanti Behera today.

When asked about giving quota to Agniveers in Odisha Police, he said, “Preference is given to NCC certificate holders in the recruitment to the state police force. Therefore, I hope that a similar policy will be made for Agniveers benefitting them after their retirement from 4-year service under Agnipath scheme.”

“Nothing has been finalised yet. We will make appropriate decision for army job aspirants in near future,” the Minister told reporters.

Speaking over ongoing anti-Agnipath protests, he said, “Agnipath scheme is a temporary recruitment process. After retirement from the service, the Agniveers will have the opportunity to continue in the armed forces. But, they have to appear in test once again for the permanent cadre. The protests are raging in many parts of the country opposing the process of the scheme. However, I am hopeful that the challenge will be resolved soon.”

The state minister praised the central scheme stating, “The 17-18 years old men and women are employed for at least 4 years under the scheme and after their retirement, they can get jobs in various departments as per their ability.”

In the wake of violent protests opposing Agnipath scheme across the country, the Centre recently announced a 10% reservation for Agniveers in the jobs offered by Union Home and Defence ministries.

Defence Minister Rajnath Singh said that the 10% quota for Agniveers will be implemented in the Indian Coast Guard and defence civilian posts, and all the 16 defence Public Sector Undertakings.

Similarly, 10% reservation will be made for Agniveers in the Central Armed Police Forces and the Assam Rifles paramilitary force, the Ministry of Home Affairs made it clear.

The short-term contractual scheme ‘Agnipath’ was announced by the Central Government on June 14 for recruitment of soldiers below the rank of commissioned officers into the three services of the armed forces. The Recruits to the scheme will be called Agniveers. The recruits will serve for a tenure of four years that includes training for six months followed by 3.5 years deployment. The Agniveers can be posted to any regiment/unit an can be further transferred to other regiments/units as per requirement.

After retirement from the service, they can apply to continue in the armed forces and up to 25 percent of the Agniveers will be selected for the permanent cadre. Personnel who retire after 4 years of service will not be eligible for pension, but will receive a lump sum amount of approximately Rs.11.71 lakh at the end of tenure.

Under the newly rolled out scheme, only aspirants between 17-and-a-half years and 21 years of age are eligible for recruitment. Following massive protests, the Centre increased the upper age limit to 23 years for the recruitment process for Agnipath scheme for the year 2022.