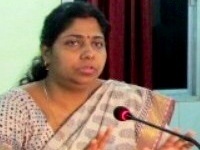 Bhubaneswar:  A day after completion of the much-awaited Bijepur by-poll, the Odisha government today effected a minor bureaucratic reshuffle in the State administration.

According to an official notifiocation issued by the General Administration Department, Yamini Sarangi, who was appointed as Bargarh Collector just two weeks ahead of the election, now back to her previous place of posting as the District Collector of Jagatsinghpur district.

The State governmnet had transfered and appointed Sarangi soon after the Election Commission’s order to change Bargarh district Collector and SP, acting on a petition of the BJP.

Senior OAS officer Indramani Tripathy, who presently holds the office of the Additional Secretary of School & Mass Education Department, has been posted as Collector of Baragarh, the notification added.

Khagendra Kumar Padhi, who was the former Bargarh Collector, has been appointed as the Additional Secretary of School & Mass Education Department in the State Government, it said.

The Vagina Monologues: Odisha denizens take a plunge into sexuality