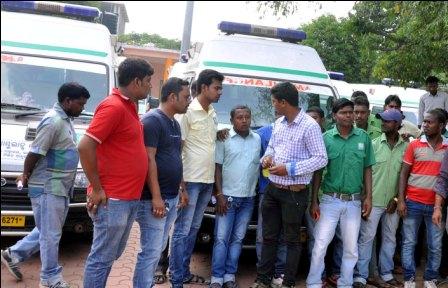 “Whereas the State Government are satisfied that In the interest of public, it is necessary to prohibit strikes in the form of cessation of work by the workers engaged in emergency medical ambulance service run by the government either by itself or through an agency engaged for this purpose so that health care delivery system in the state is not affected or disrupted,” the Home Department notification read.

Further, Section 2 (b) of the Act, strike means the cessation of work by a body of persons employed / engaged in any essential service acting in combination or a concerted refusal or a refusal under common understanding of any number of persons who are or have been so employed / engaged to continue to work or to accept employment and includes unauthorized absence from duty in pursuance of a common understanding among the persons who unauthorized absent themselves from duty or under the direction of any other person or persons, it added.

“In exercise of the power conferred by sub-section (I) of Section -3 read with Section – 2 of the Orissa Essential Services Maintenance Act, 1988 (Orissa Act 9 of 1992), the State Government do hereby prohibit strikes in the cessation of work by the workers/crew members engaged for running emergency medical ambulance service run by the government either by itself or through an agency including 108/102 Ambulance Services. The order shall remain in force for a period of six months with effect from August 1, 2017,” it concluded.

Odisha gets average rainfall at par with LTA in July