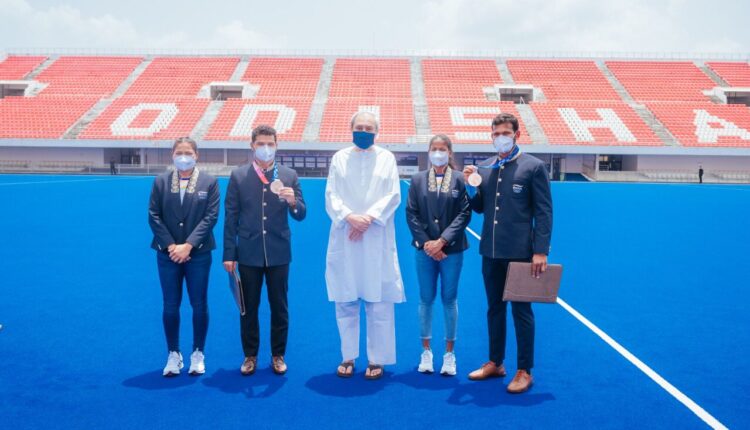 At a special event held at Kalinga Stadium, Patnaik rewarded Birendra Lakra and Amit Rohidas with Rs 2.5 crore cash and offer letter for appointment as DSP in Odisha police. He appreciated the performance of the players in winning Bronze medal for the country.

The CM also handed over cash award of Rs 50 lakh each to Deep Grace Ekka and Namita Toppo and commended the spirited fight of the women’s team in reaching semi-finals and creating history in Indian Hockey. Lauding their performance, he advised them to continue their hard work and bring more laurels to the country. He also assured all of them of his full support in future.

The players expressed their deep gratitude to the Chief Minister for supporting Indian Hockey, which led to wonderful results in Tokyo Olympics. The Olympians also thanked the State Government has for fulfilling its commitment of cash rewards and jobs on their arrival in the state.

Birendra Lakra and Deep Grace Ekka, Vice-Captains of  the hockey teams presented the CM the Team Jersey with signatures of all team members.

“Thank You Chief Minister Naveen Patnaik Jee for supporting hockey, when everyone was running after cricket. Sir you, your vision and your confidence for hockey has led to the results we see today in revival of hockey, which De Facto is our national game,” he said.