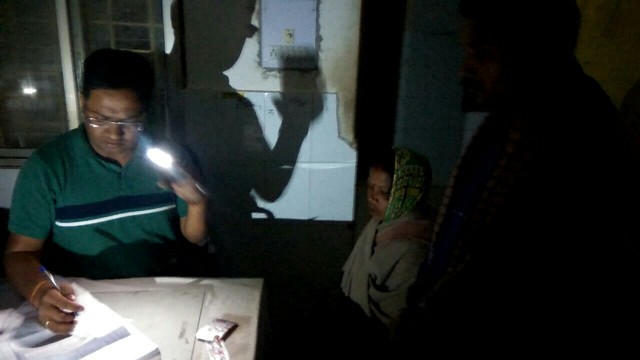 Khordha: In what could be termed as disturbing scenario in healthcare services in Odisha where the doctors are depending on the torch and candle lights to attend to their patients at hospital due to power disruption.

Even as crores are being spent under different schemes for improvement of healthcare services, no big change has been noticed so far in the condition of government hospitals both in remote and urban areas of the state.

Power disruption for 9 hrs in these Odisha places tomorrow

Brokers on prowl: 4 arrested from Capital Hospital in Odisha capital

The incident was reported from Balipatna Community Health Centre (CHC), on outskirts of state capital Bhubaneswar, where the doctors were found attending to patients and treating them at the darkened hospital using mobile phone torch and candle lights for hours in the evening on Monday.

According to reports, Dr Srikant Behera at Balipatna CHC attended to the patients for hours using his own and nurse’s mobile phone torch as there was no power in the evening. Entire hospital right from the doctor rooms to OPD and women ward even maternity ward remained in dark. The expectant mothers and newborns relatives were also found sitting in the ward lighting the candles.

This is not for the first time; the doctors are attending to the patients using torch lights in evening hours. It has been continuing since past few years.

When the power goes off, the hospital is darkened and the generator is not functional, said Dr Behera when asked him about darkness in the hospital.

As the battery of the inverter is not keeping its charge and due to unavailability of kerosene the generator is also not functioning, he added.

Notably, over 250 patients per day used to visit the Balipatna CHC, which is located in Jaydev Assembly Constituency. Around 6-7 patients get admitted to the hospital every day. Due to disrupted power services in the hospital, the patients become the worst sufferers.

When asked to the CHC officer Dr Mamata Rath, she made excuses citing that she has taken the charge recently.

The CHC was provided kerosene from the Block, but the service was disrupted in the past two months, Dr Mamata said adding that she had written to the BDO in this regard but in vain.

However, she assured to sort out the issue as soon as possible.

Woman who hurled eggs at Odisha CM gets bail

Kuldeep, Chahal could be the X-factor in 2019 World Cup: Kohli

Advisory to all states including Odisha over assault on…